Murder At The Juice Joint – A Murder Mystery Party

SPOILER ALERT:  This post shares details of the event and identifies the murderer.

Our Murder Mystery Party took place over the weekend and WOW – it was fun!  I was so impressed with all of our guests (we had 35 total) get into their characters, wear fabulous costumes, and bring delicious appetizers!

Let’s take a step back.  Last Fall, I purchased a Living Social deal for a Night of Mystery murder mystery party.   This was the first time I had ever hosted something like this – we have never attended one either.  After talking to most of our guests – this was a first for many of them.  Night of Mystery allows you to choose your theme and the number of guests for your party and your purchase gets you a large PDF file giving you everything you need to host this event. We decided on a Roaring 20s theme set in a “Juice Joint” – I thought it would be perfect. 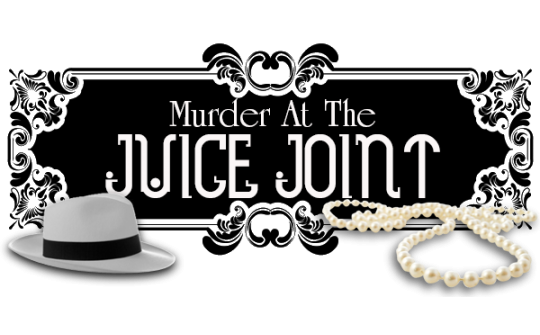 I started by casting a pretty big net out to my friends to see who might be interested in this – I was pleasantly surprised to get an overwhelming response!  To ensure the party could accommodate the guests (and vice versa), I wanted to make sure the invitees understood the commitment.  They are all friends of mine and know how I roll – so I’m sure no one was surprised.
Once I had a good idea of who was willing and able, I sent out an Evite, and noted that once the invitees accepted the Evite, they would receive their character assignments.  I have never seen so many fast responses to an Evite before in my life!  Keep in mind – this was a good 2 months before the party. 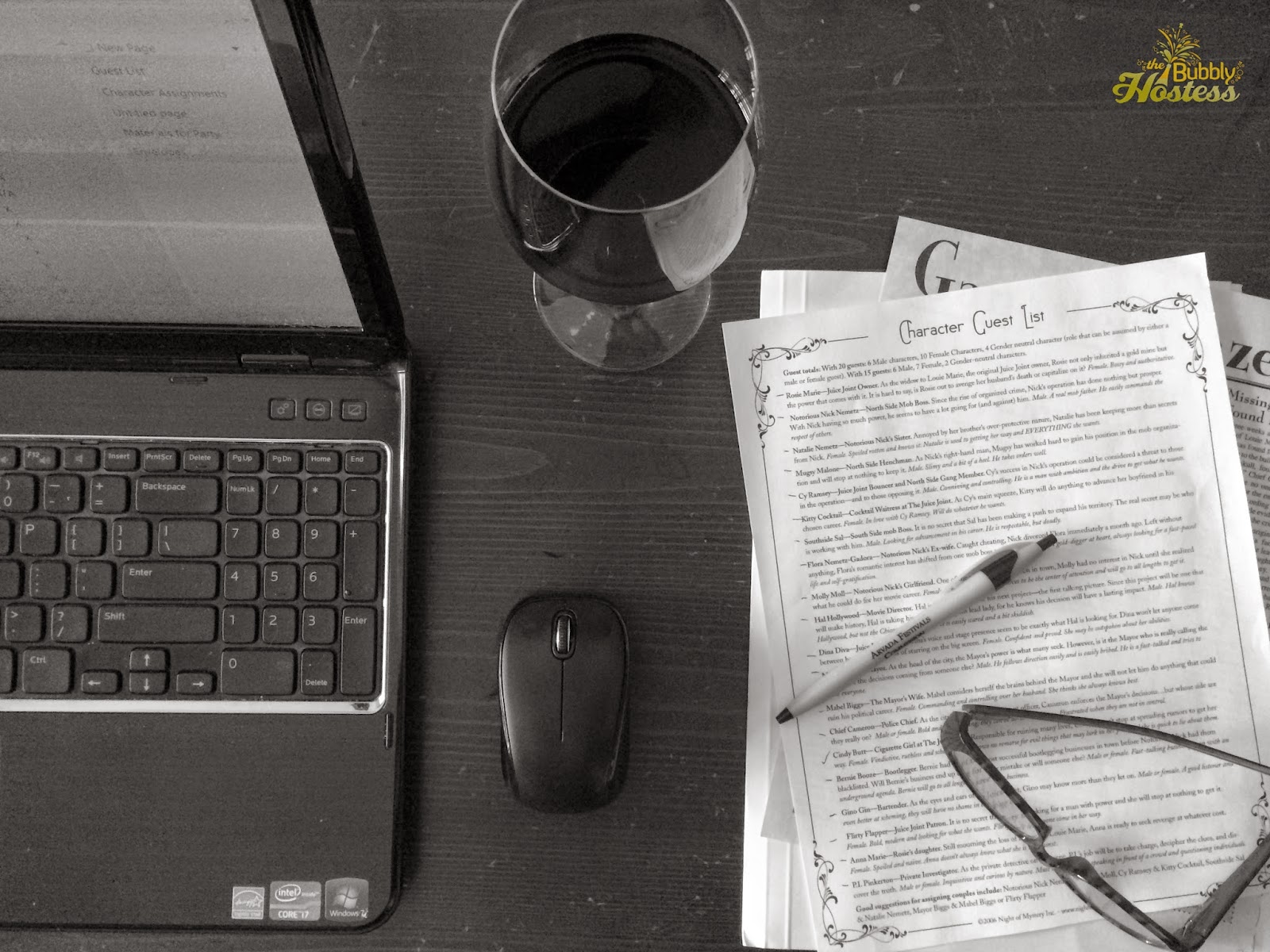 The 125 page PDF file I downloaded from Night of Mystery gave me everything I needed, including the option to only know just the high level details, which I did.    I reviewed the basic character descriptions and made some assignments – but for the most part, they were done at random.  Once those were done, I printed a copy of The Gangster Gazette, the invitation, and a detailed character description for each guest.
Upon arrival, each guest opened “Envelope A” giving them basic objectives to complete throughout the evening along with a name tag and $500 in funny money to use for bargaining and buying secrets. 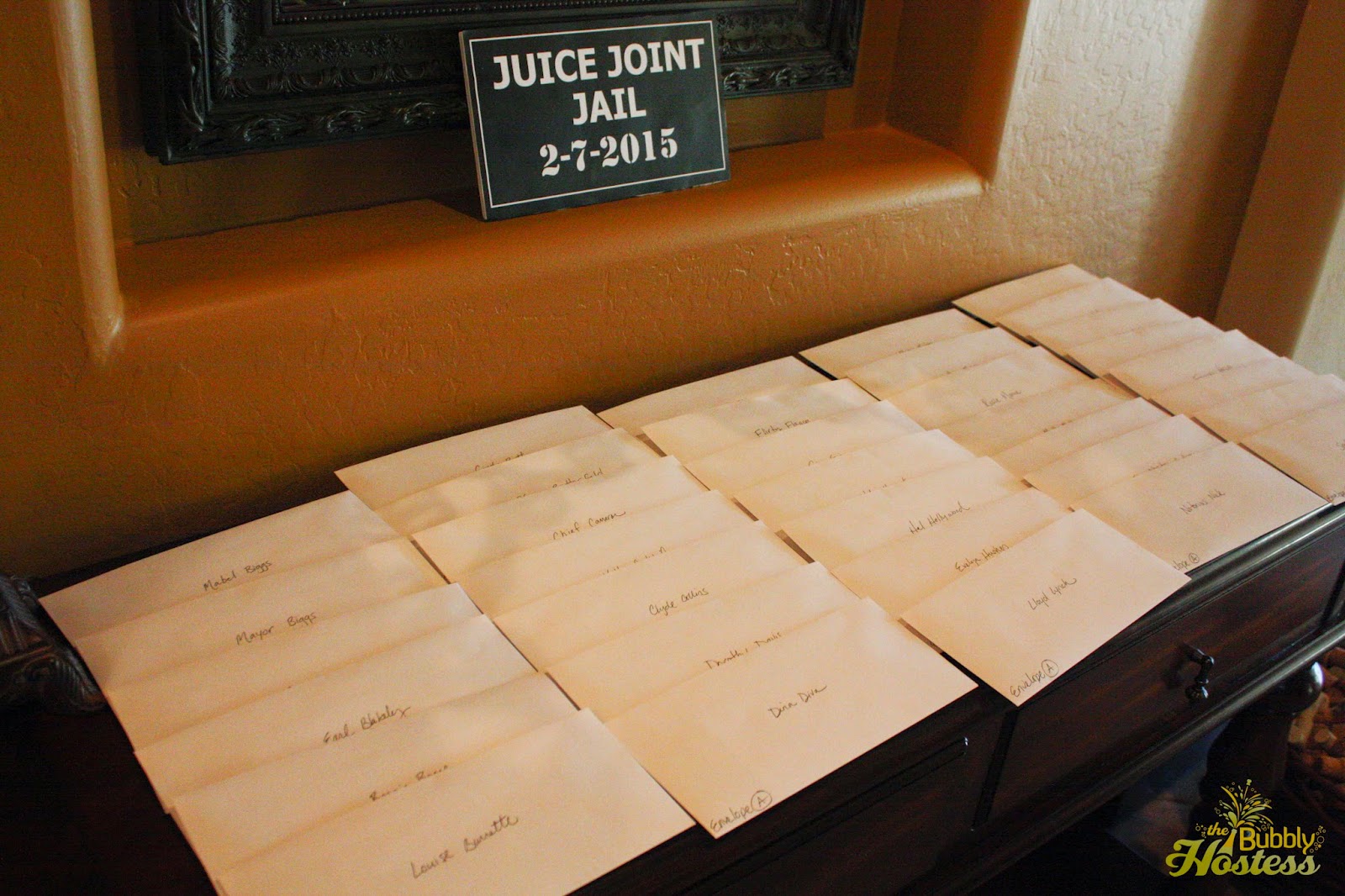 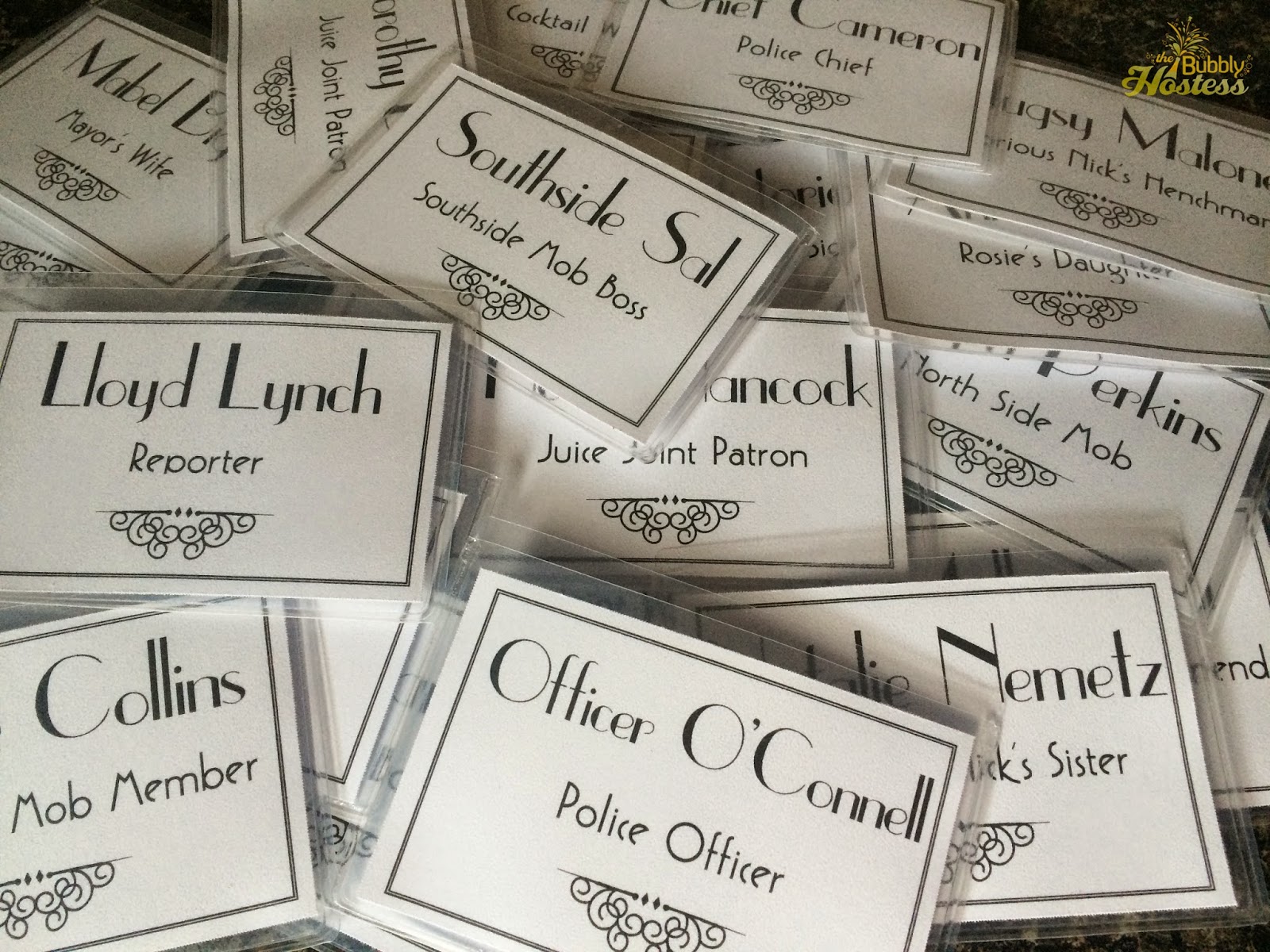 The PDF also provided lots of ideas for decorating your “juice joint”.  Not only did I print and hang some of the mob photos that were included with the party, but I also asked my guests who were playing more “famous” characters (e.g. actresses, Hollywood director) to also send me a photo of themselves in character so that I could hang on the walls.  I also had them sign their character’s name. 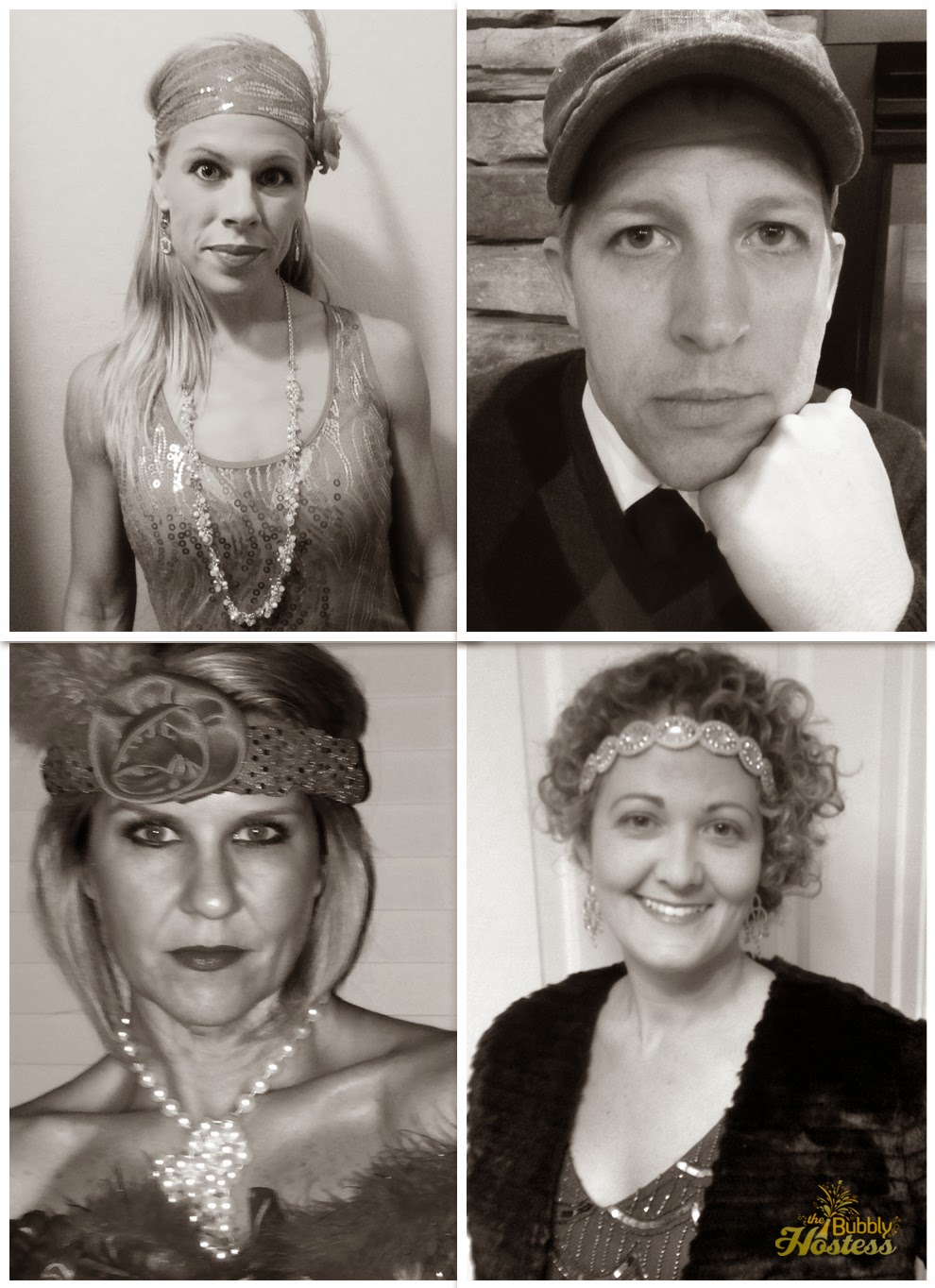 I took the idea from the PDF to create wanted posters for the two mob bosses and one of the key henchmen – but inserted my friends’ photos in them for a more realistic look!  (Hint: The Hubby was Southside Sal) 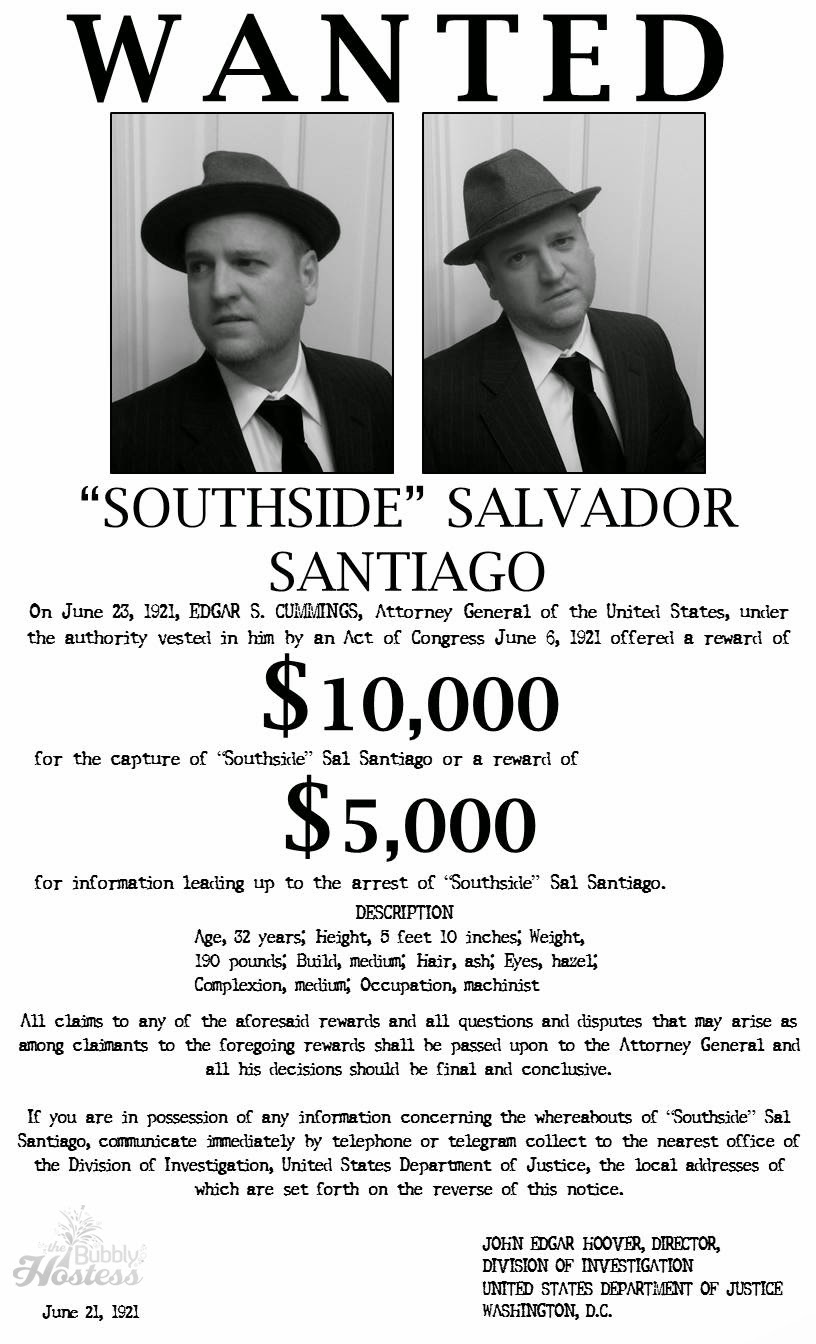 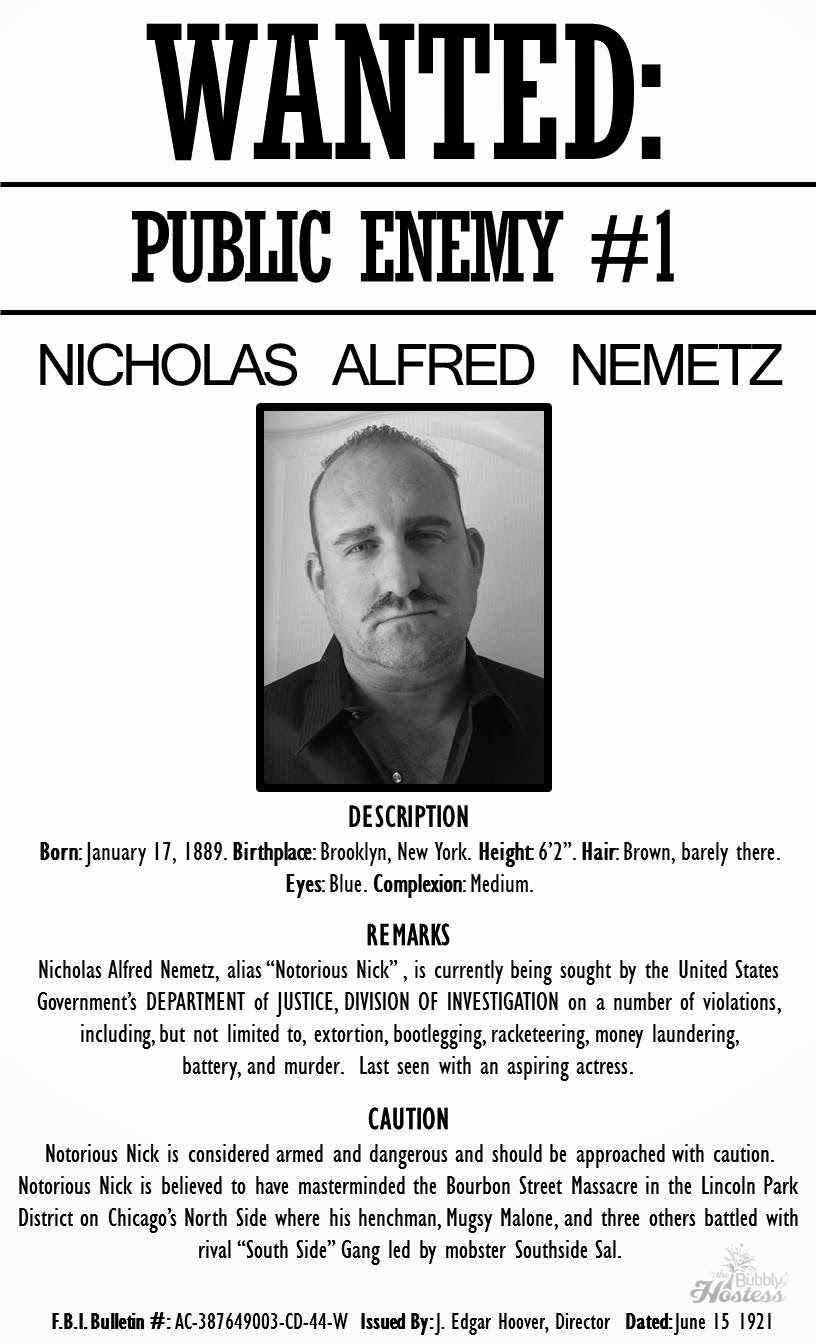 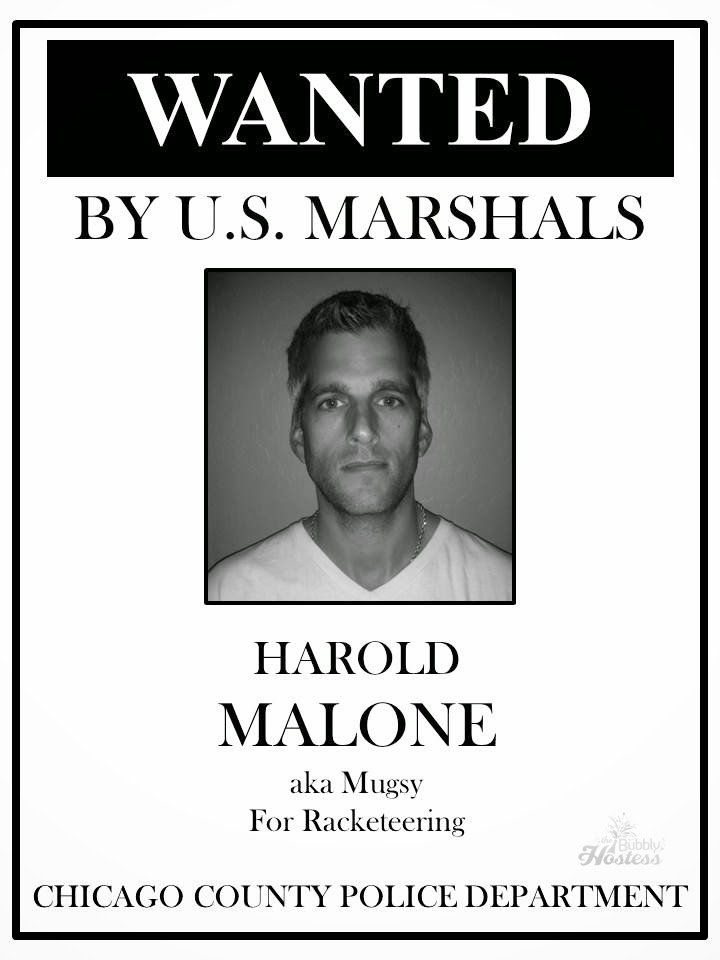 Other decorations we had included empty liquor boxes placed around the house, bottles with liquor labels I printed from the PDF, and other signs for the Juice Joint that I attached to foam board. 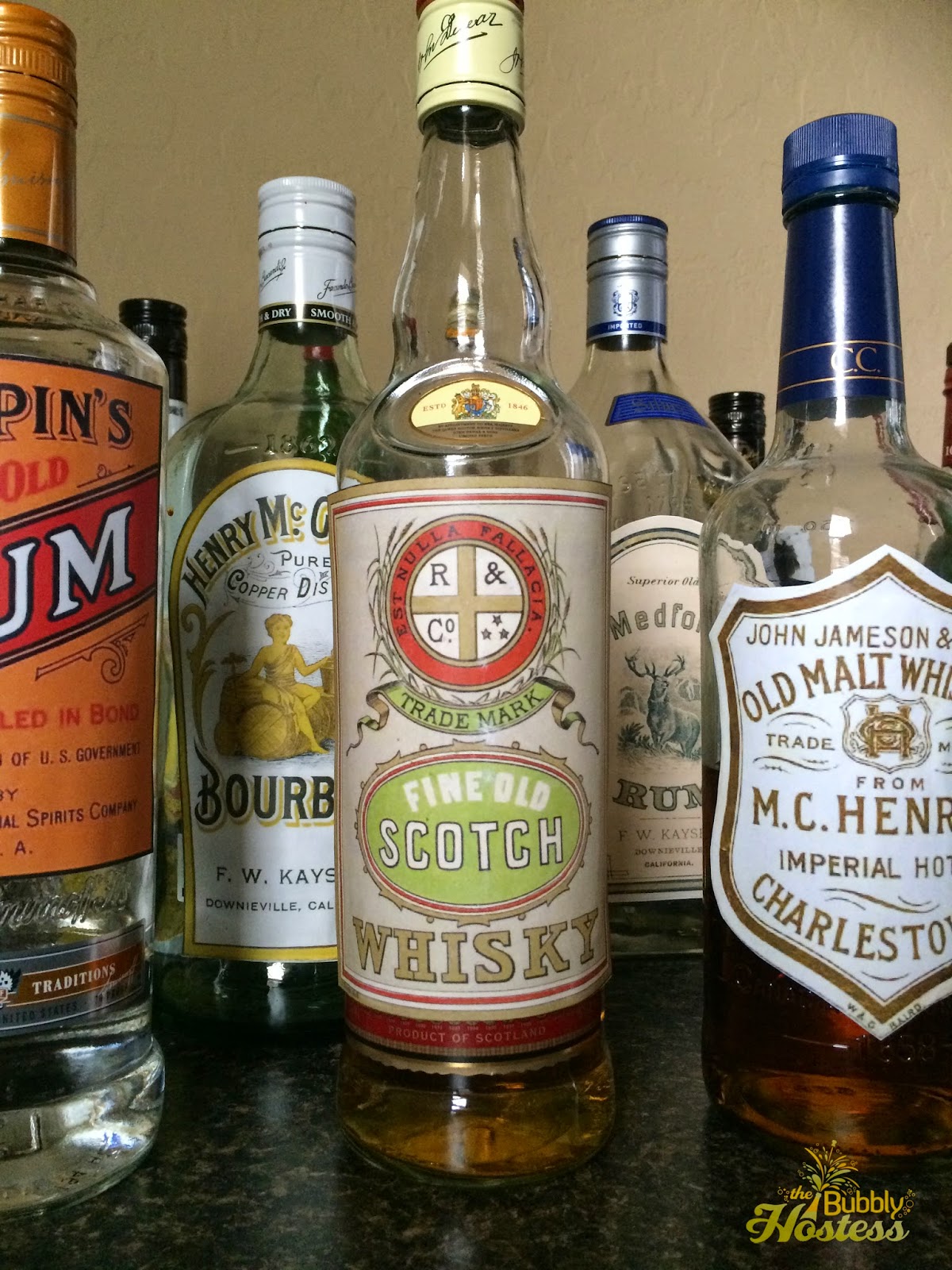 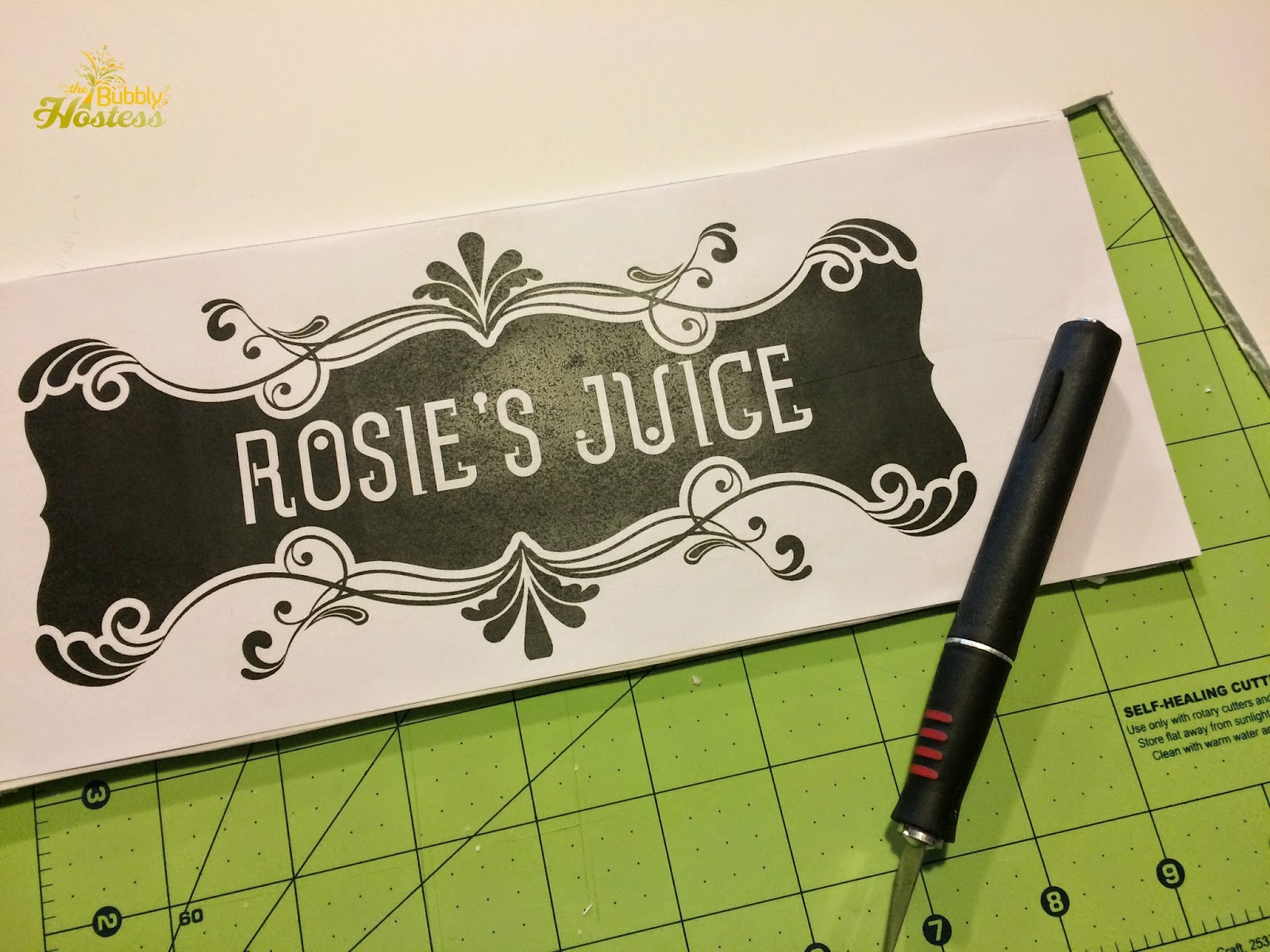 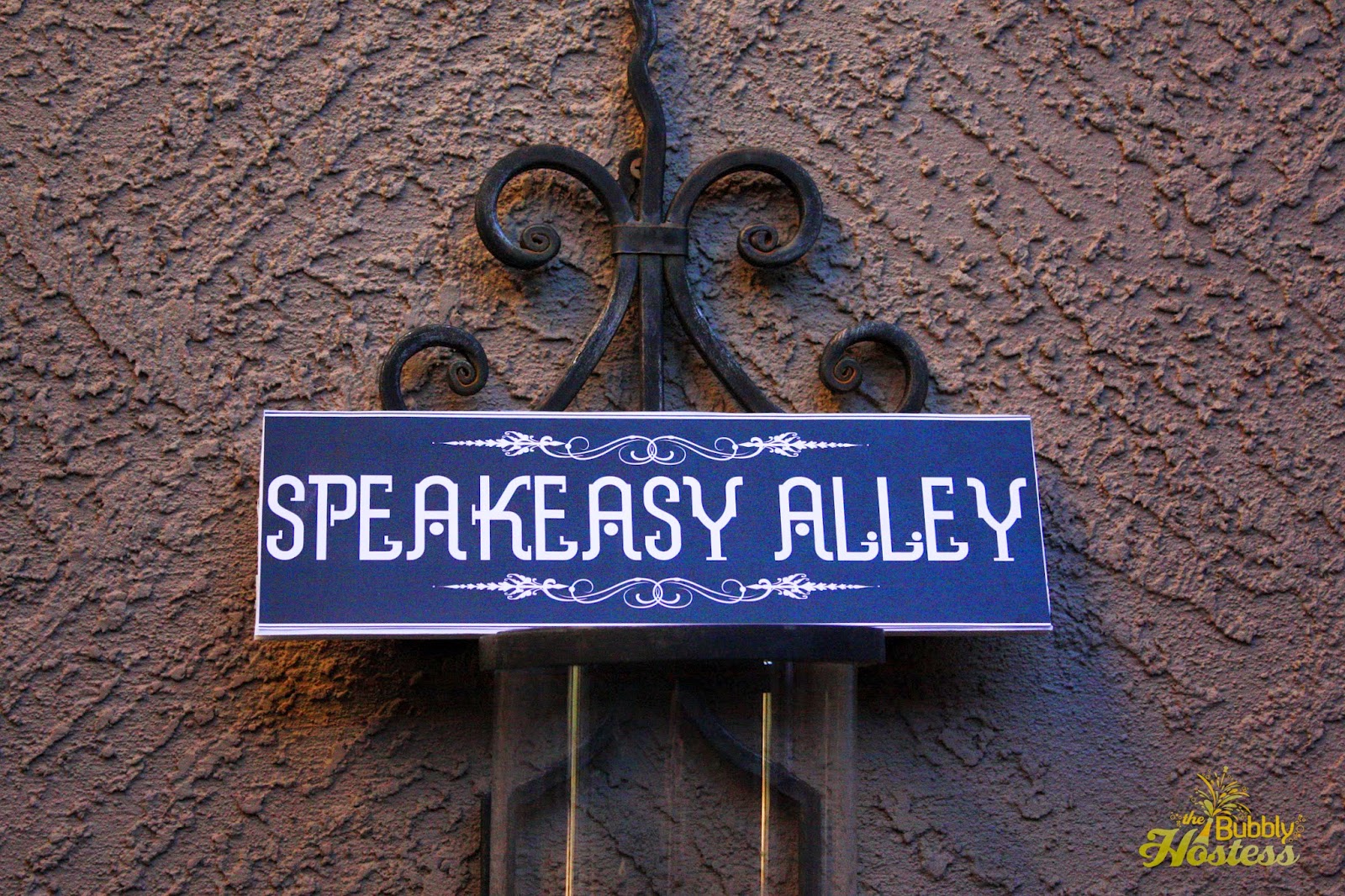 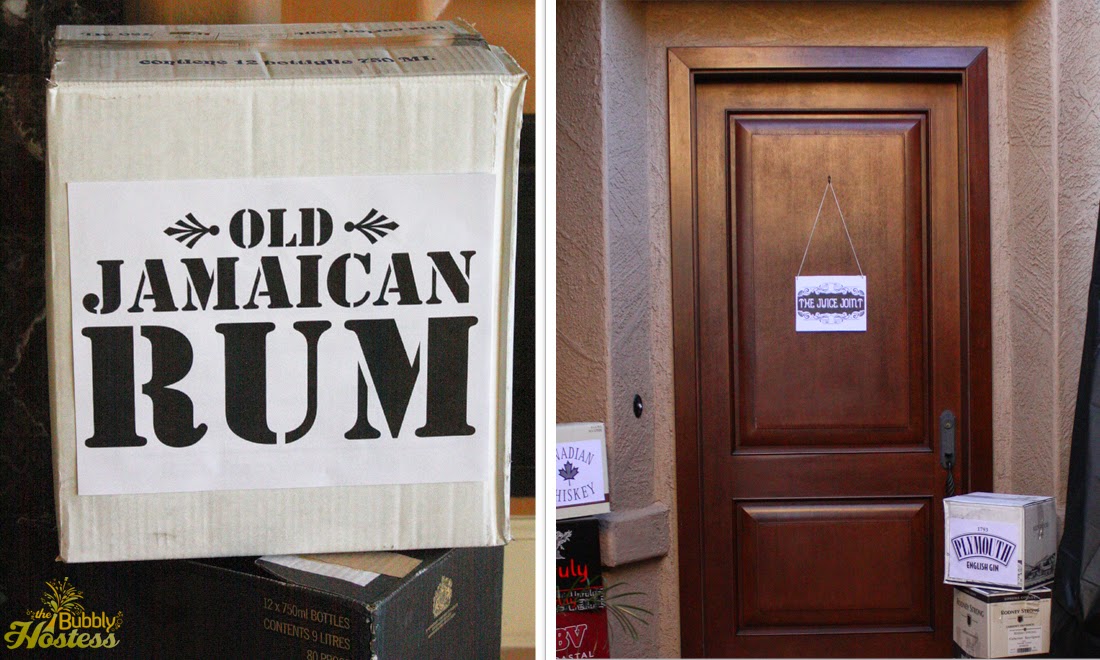 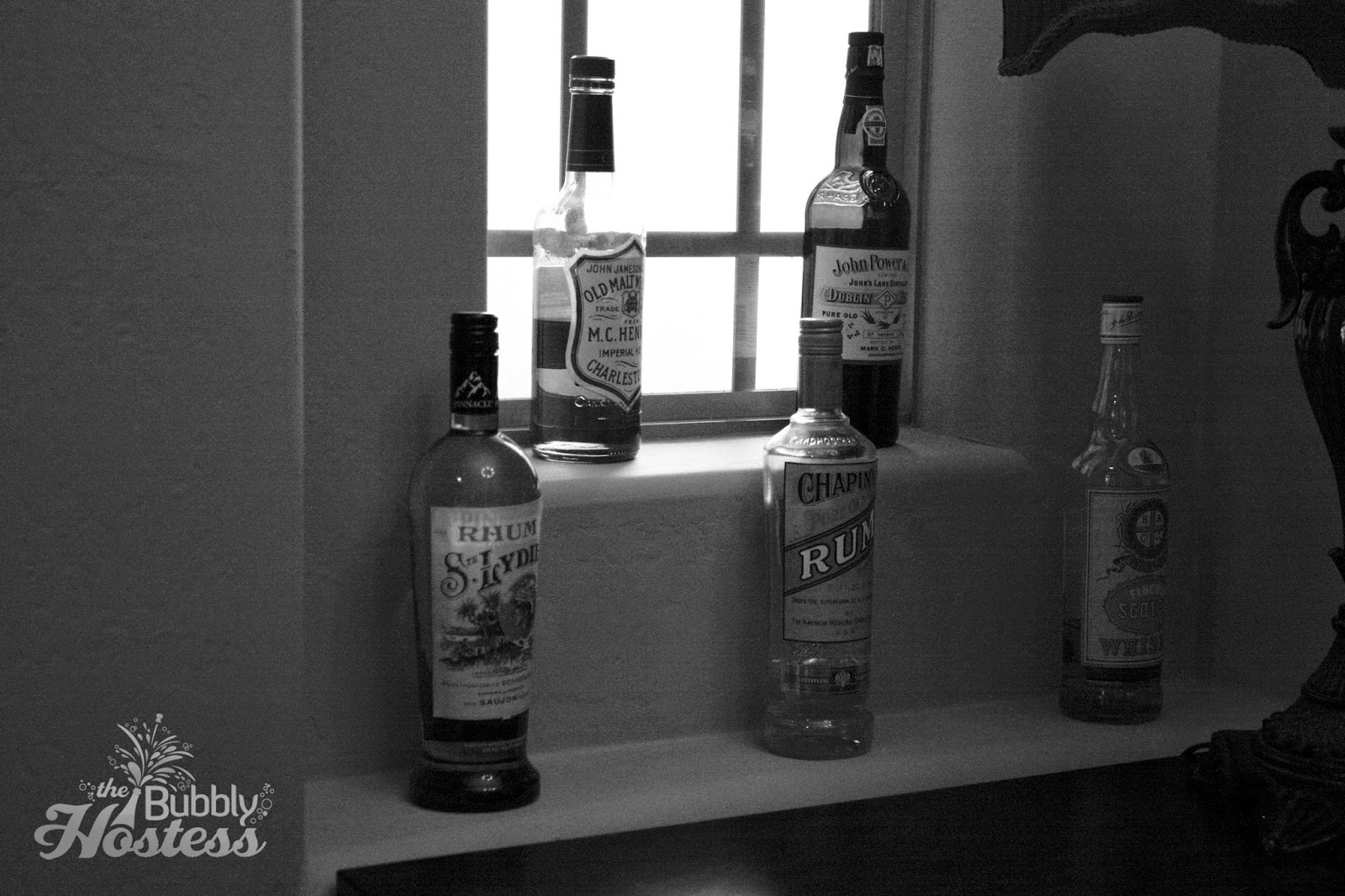 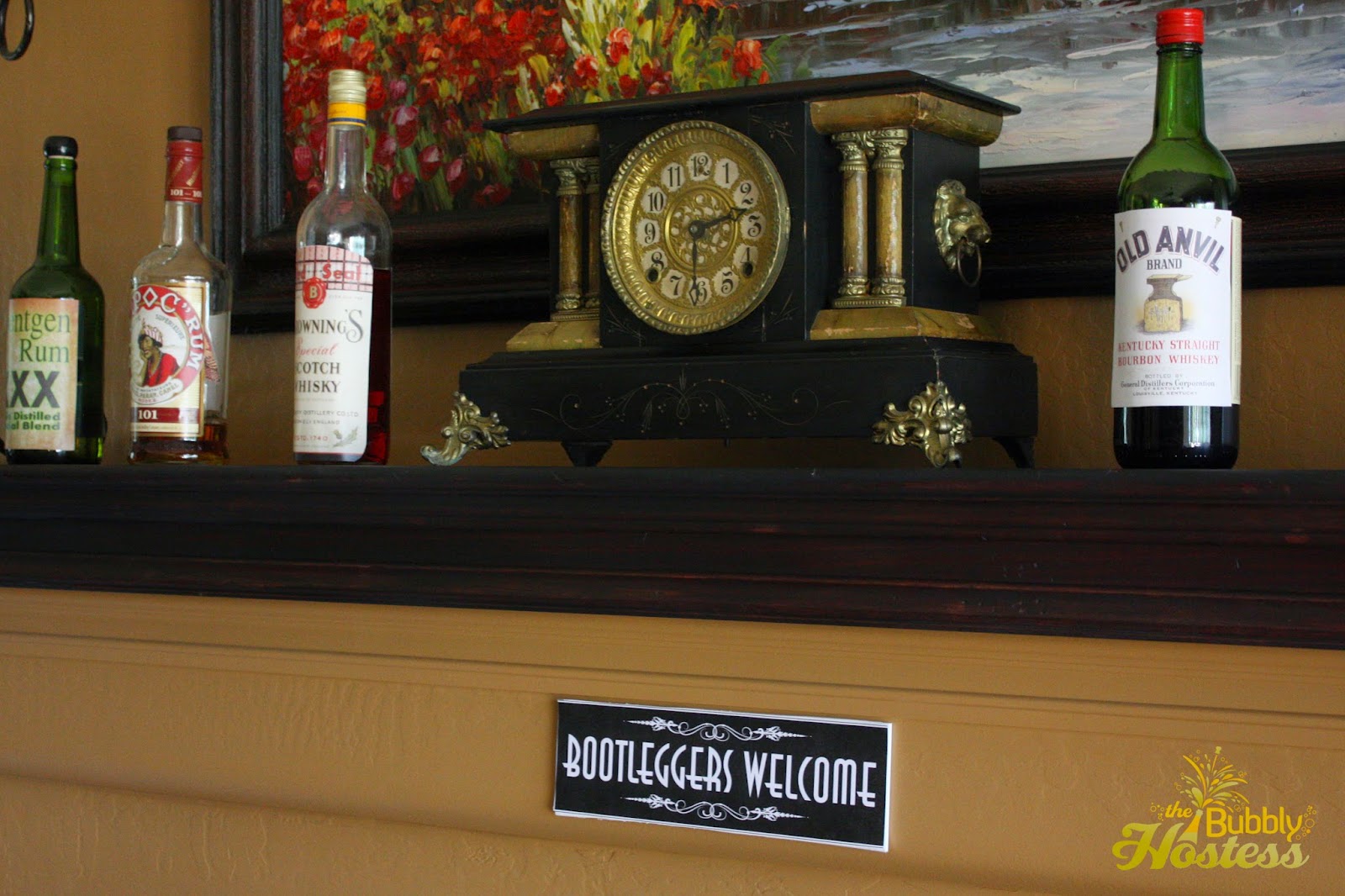 About a month before the party, The Hubby said, “If we are going to do this, we should really do it right”.  So we removed all of the furniture and the rugs from our great room and rented cocktail tables and tablecloths from Y-Knot Party Rentals.  I did a lot of research on what else I could add to our speakeasy to make it more realistic.  Since this was during prohibition, I learned that patrons often drank out of coffee cups and mugs so that the liquor wouldn’t be seen if there was a raid.  So I rented a random assortment of coffee cups to serve drinks in as well!  Those tiny cups may have overserved me 🙂 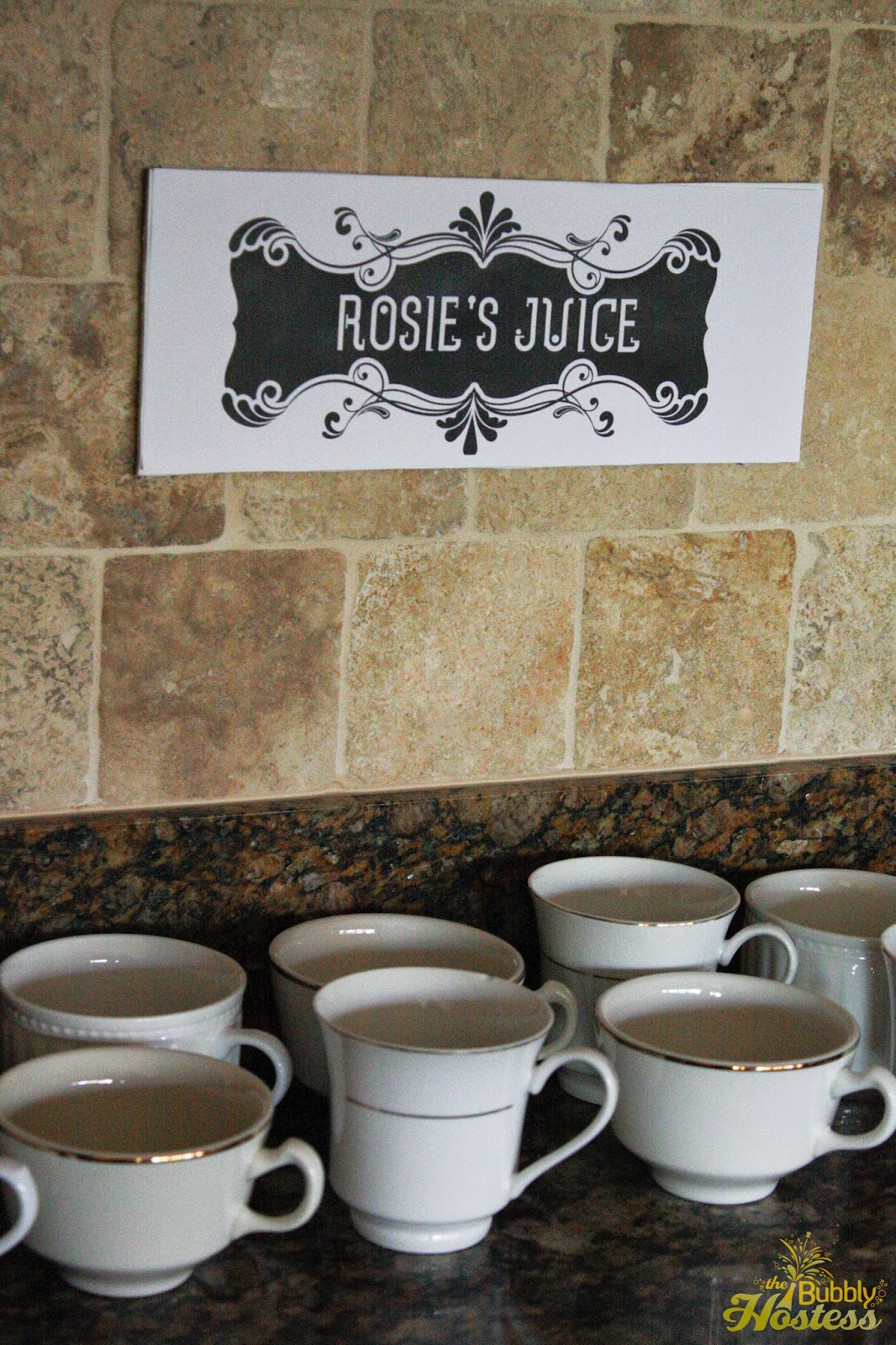 For food, I asked our guests to bring an appetizer to share – they DELIVERED!  Everything was amazing! 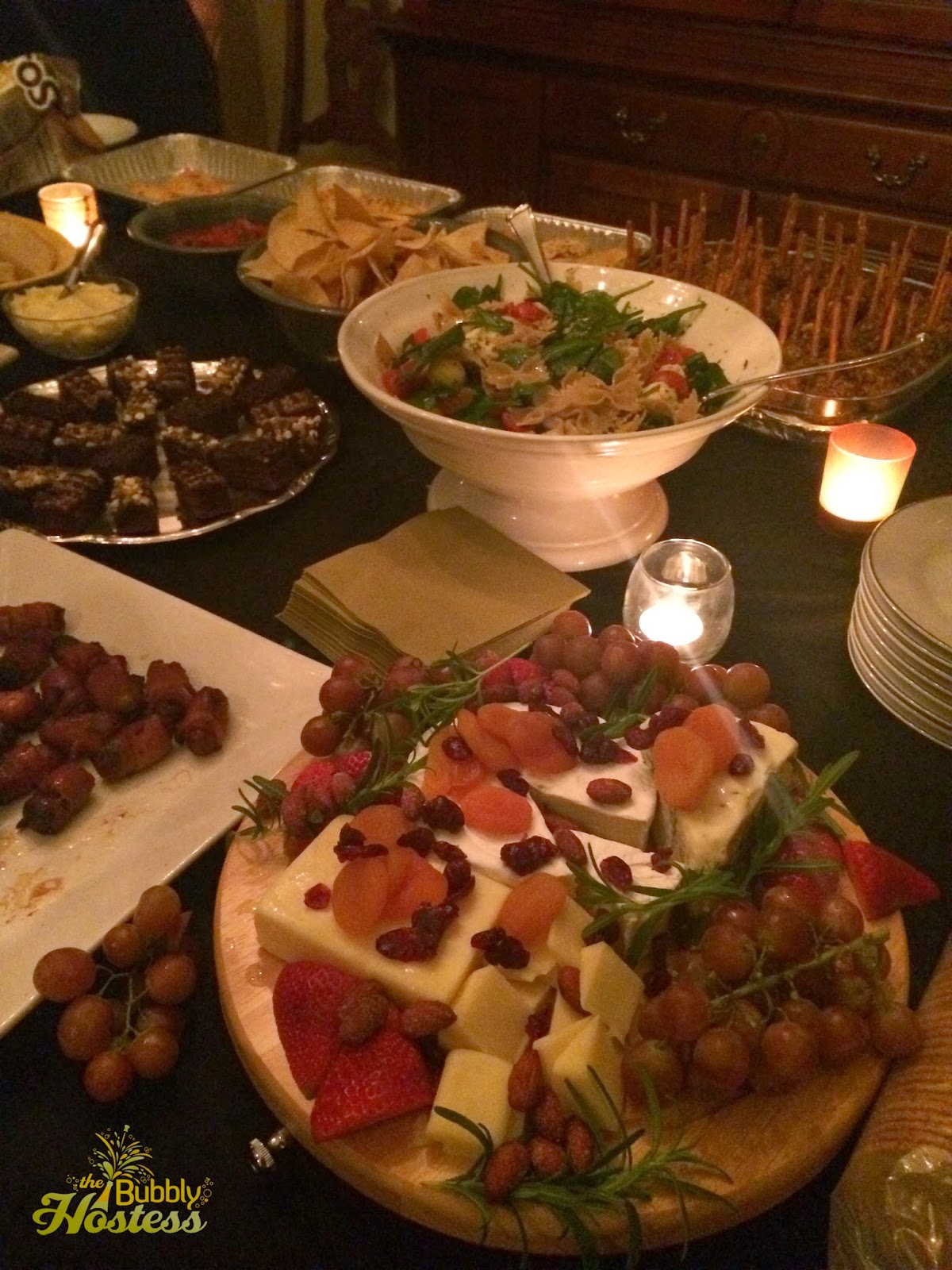 Once the murder took place, I distributed “Envelope Bs” to everyone which told the guests what they know and their final set of objectives to complete.  Then, the guests voted on “Who Dunnit” as well as the Best Dressed, Best Performance, and shared how much money they had at the end of the night. After the voting, I went to work!  I set up everything I needed in my laundry room, threw on my reading glasses, and started to tally everything up.  We ended up with 5 guests correctly guessing the murderer and I used the certificates in the PDF to award the 1st and 2nd place winners of the other categories.  It was a great way to wrap up the night! 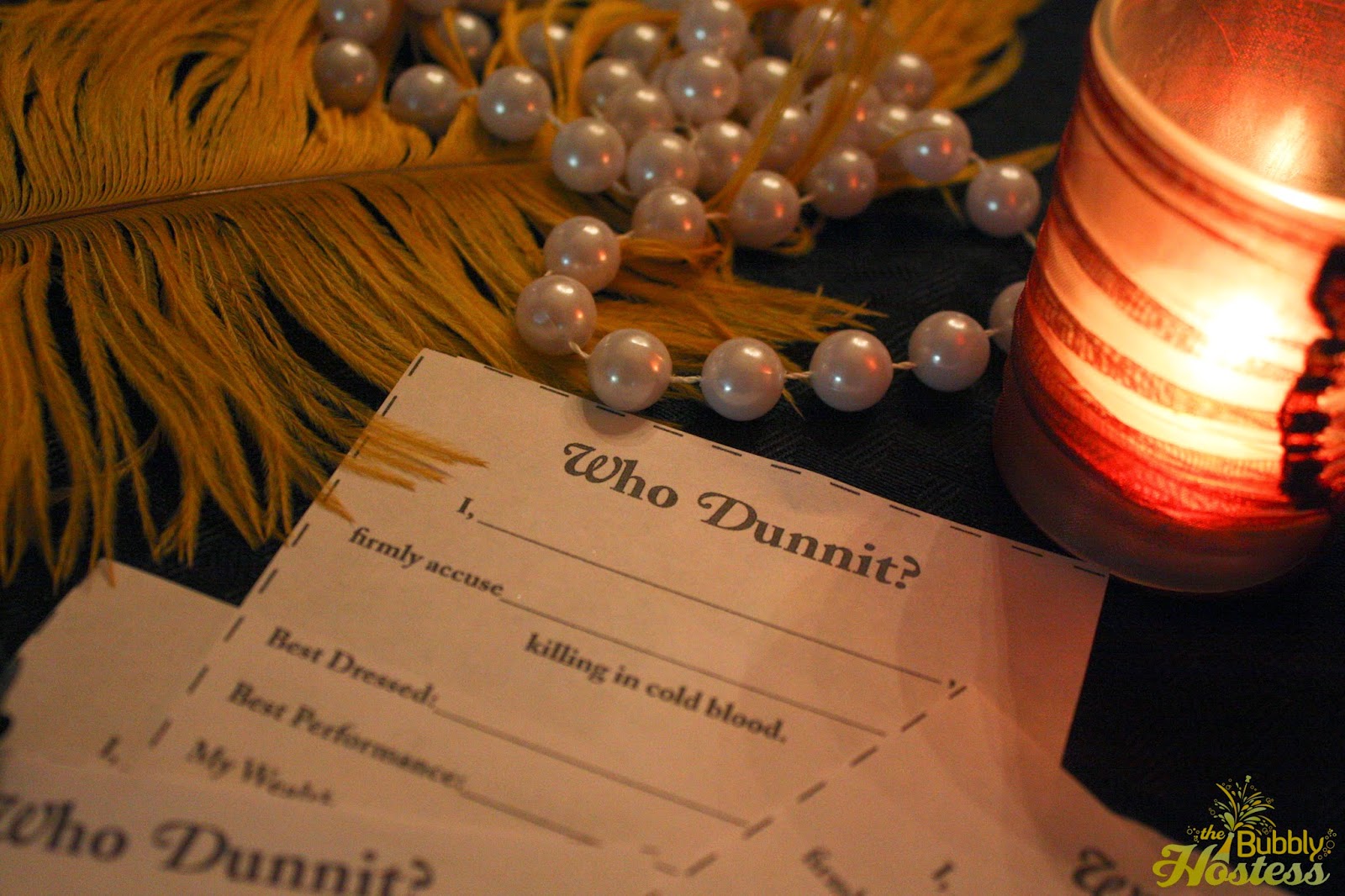 Our guests took lots of photos for us!  Our friend Gretchen who is a professional photographer was kind enough to take some photos as well!

I found the Brick Photography Backdrop Paper Roll  at Hobby Lobby and thought it would be perfect for photo opportunities.

I’ve included some photos of our guests here – there were so many!  I want to thank everyone who participated in this – it was, hands down, one of the best parties I’ve thrown!  If you have thrown a murder mystery party or are thinking about hosting one – I’d love to hear from you!

(Hint:  I’m in the black and gold dress, black hat, and curly hair) 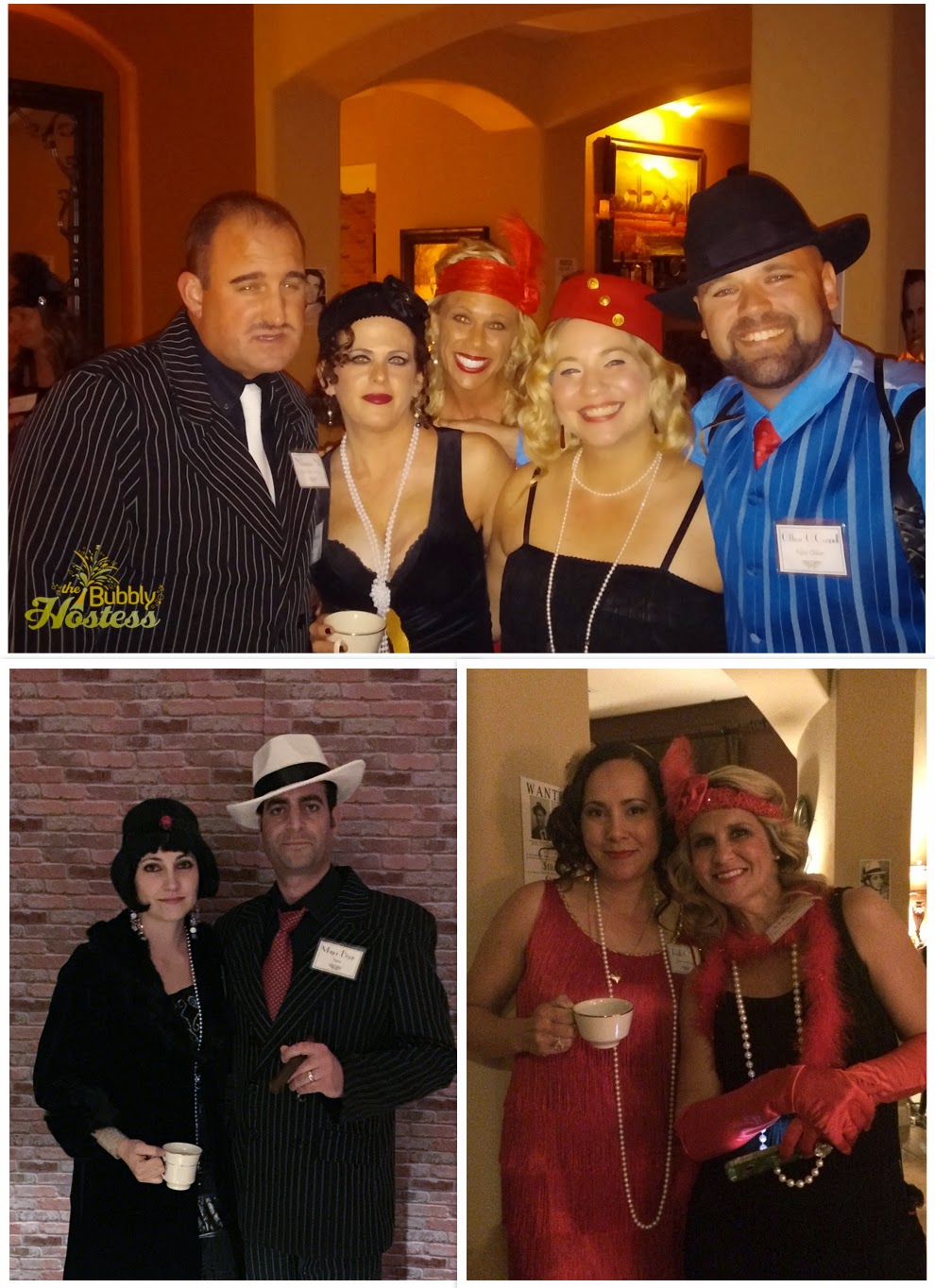 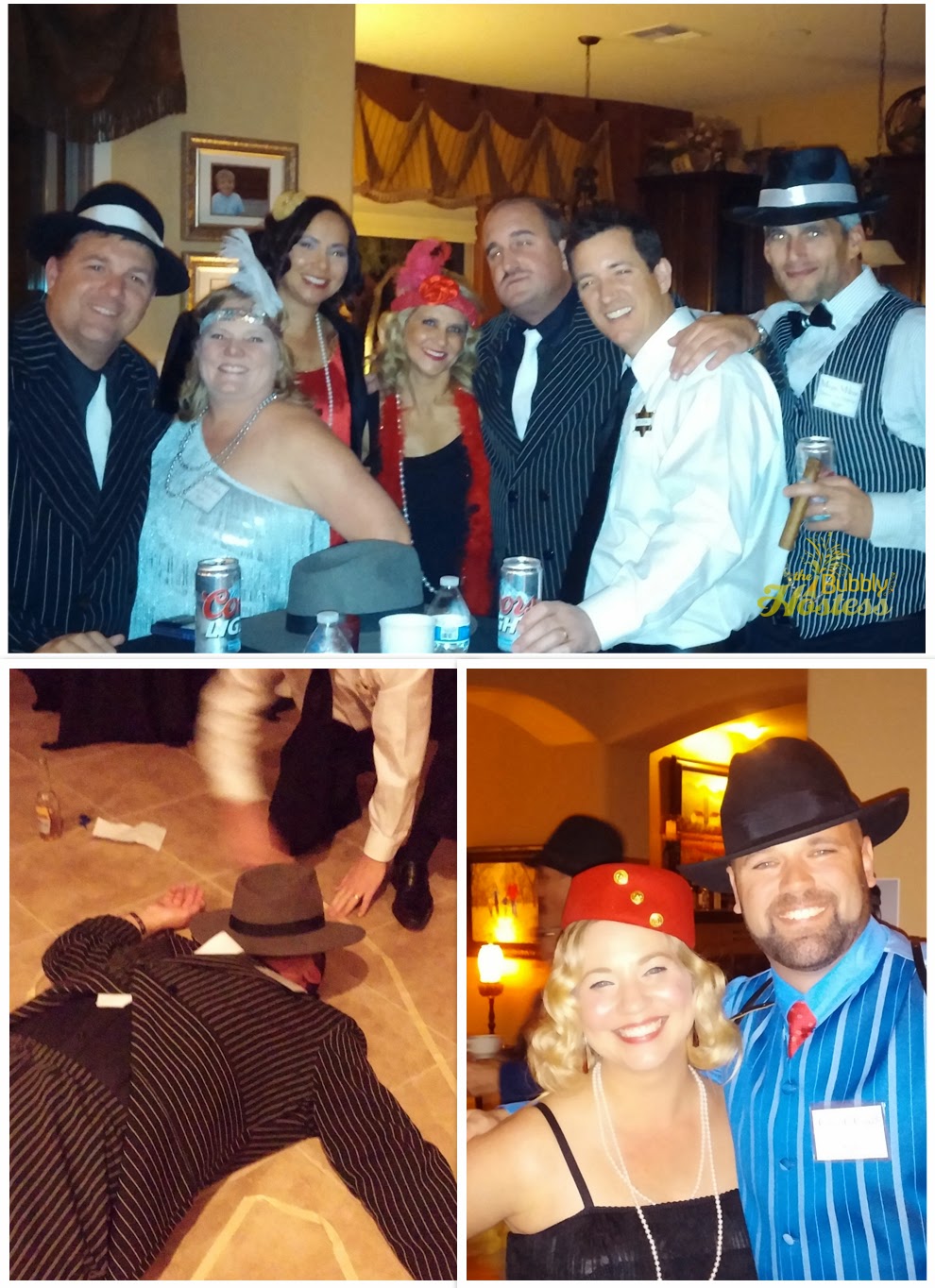 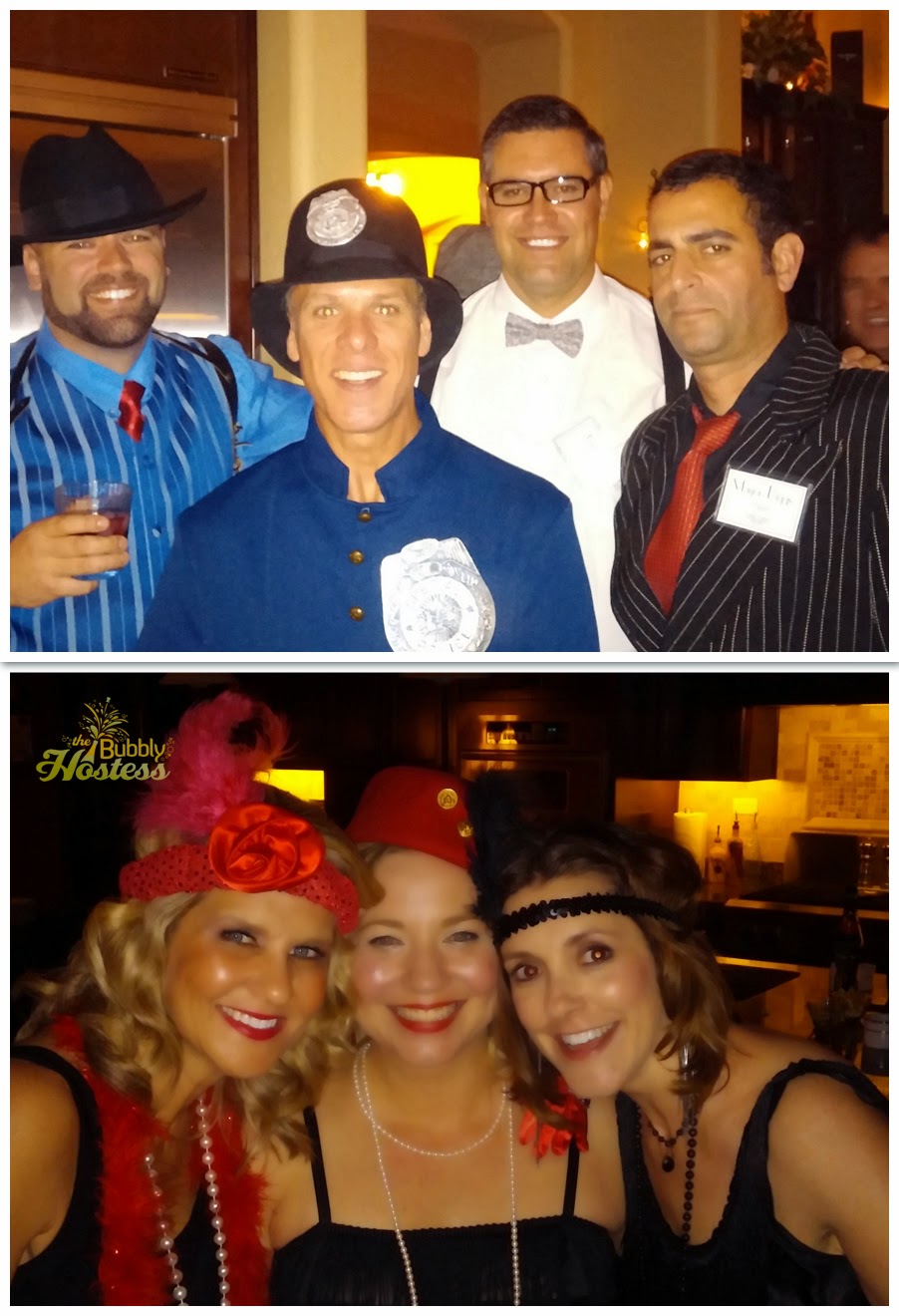 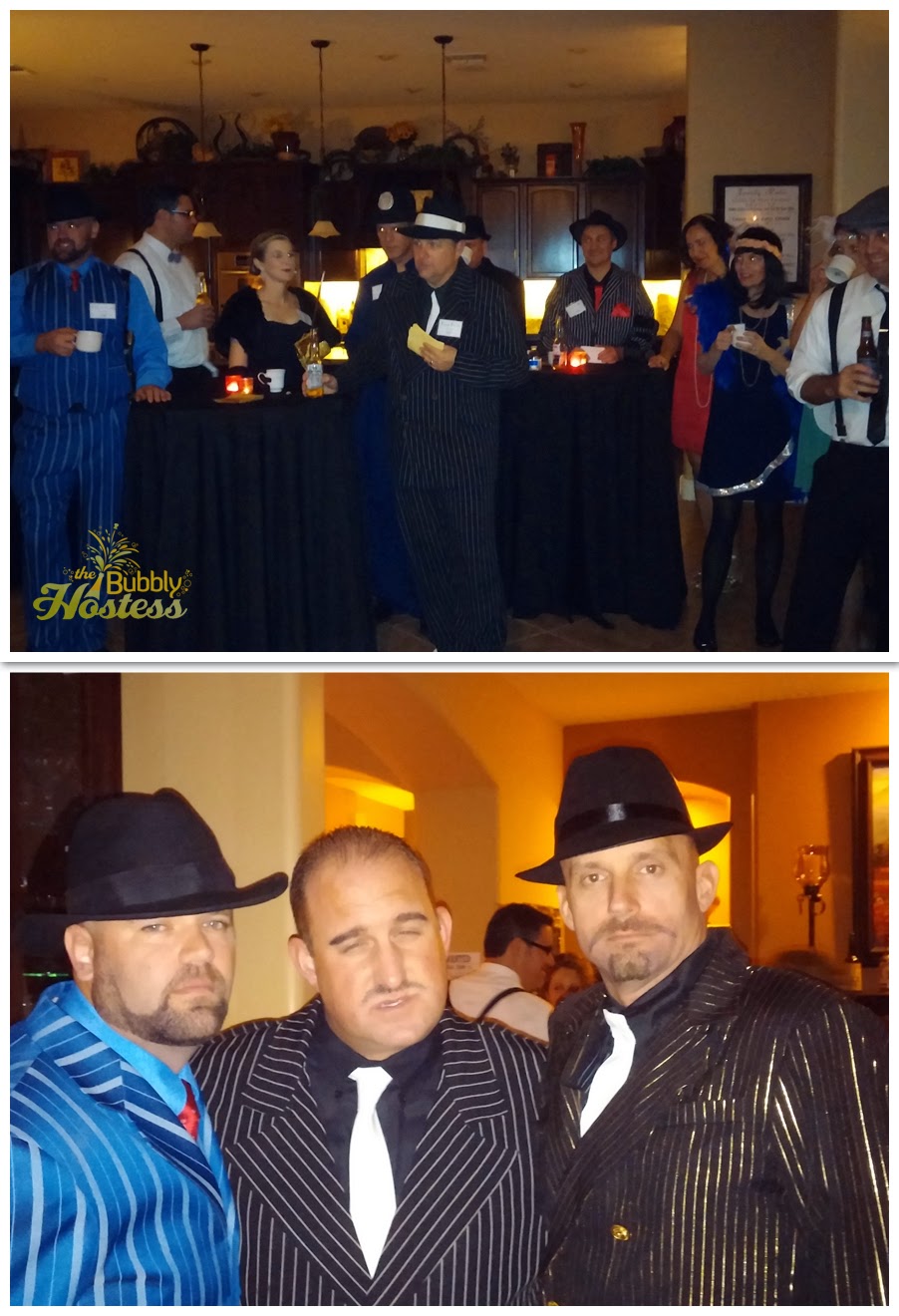 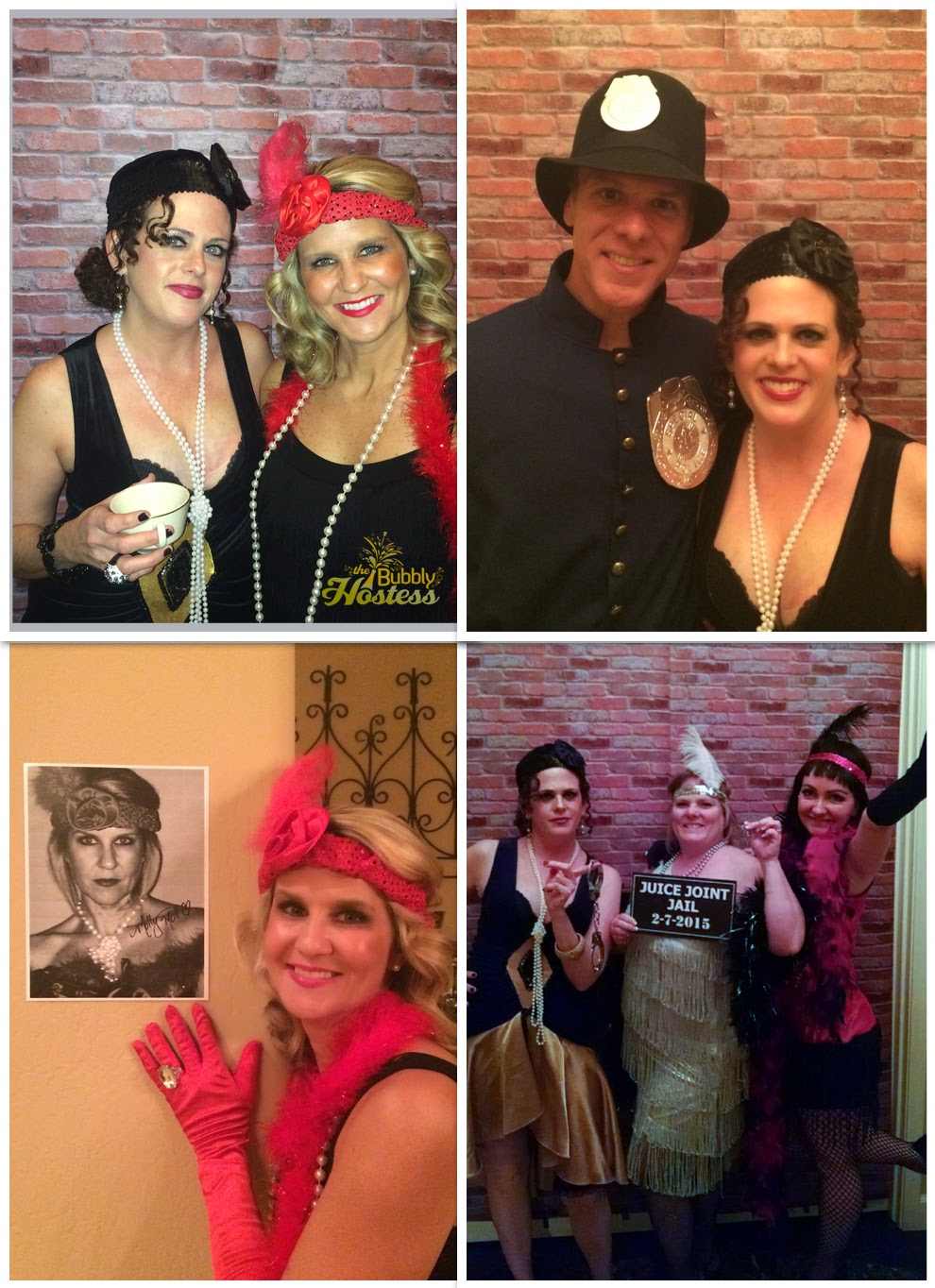