Everyone knows the show Wipeout, right?  My boys and The Hubby LOVE to watch it every summer.  While thinking about plans for my older boy’s birthday party – Wipeout came to mind.  It was a done deal.

Unfortunately, we learned this summer that Wipeout Season 8 had been canceled – the entire family was quite bummed to hear this news!  Wipeout Run is always an option for super die-hard fans – and those willing to take on the challenge! The Bestie is on a team to participate this fall in Southern California – I can’t wait to see pictures!

Back to the party – for the past couple of years now, my older boy has really gotten into the party planning process with me.  We started with the cake, he loves watching the contestants on The Big Red Balls so a lot of our ideas stemmed from that, starting with the cake. 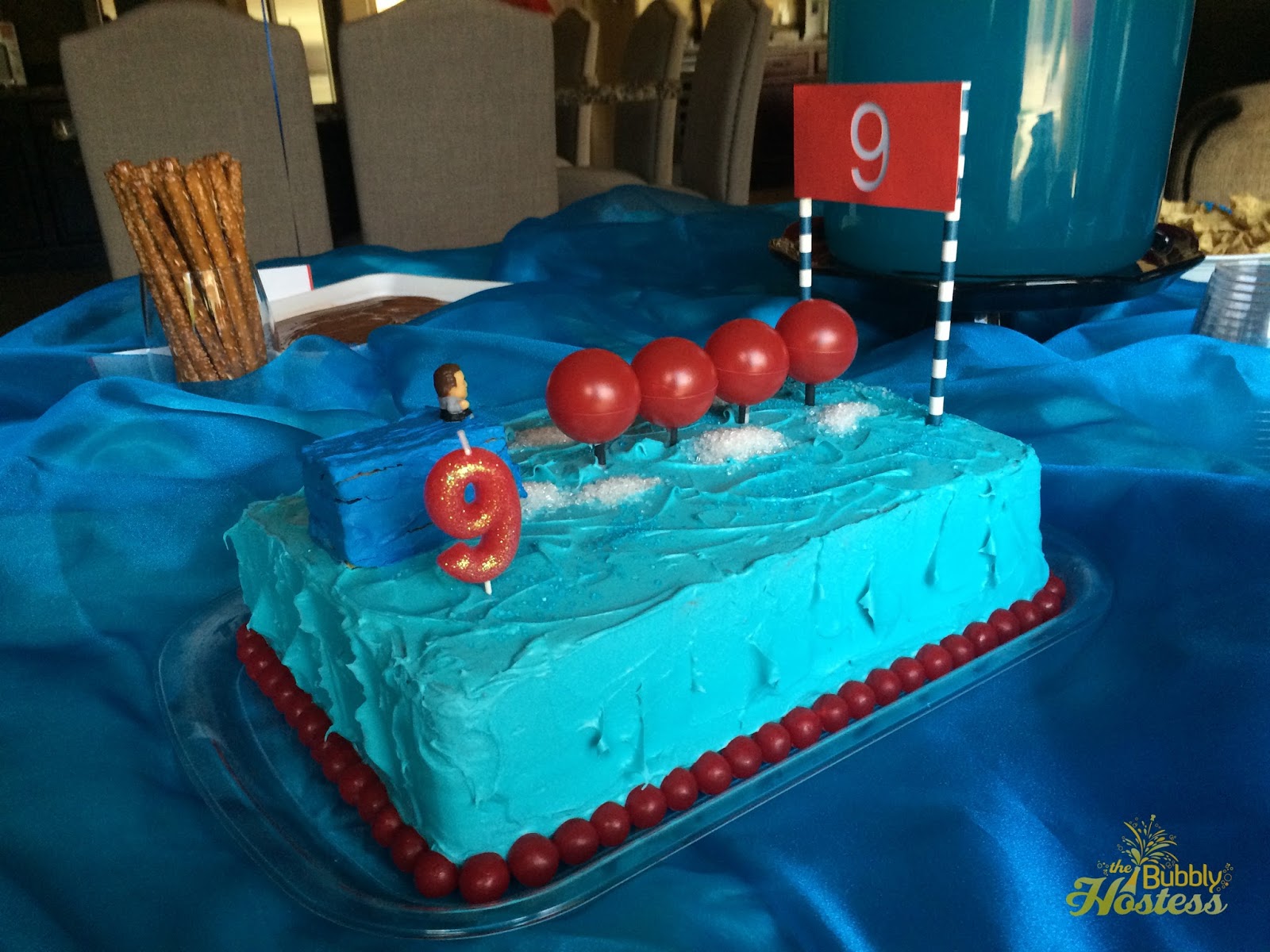 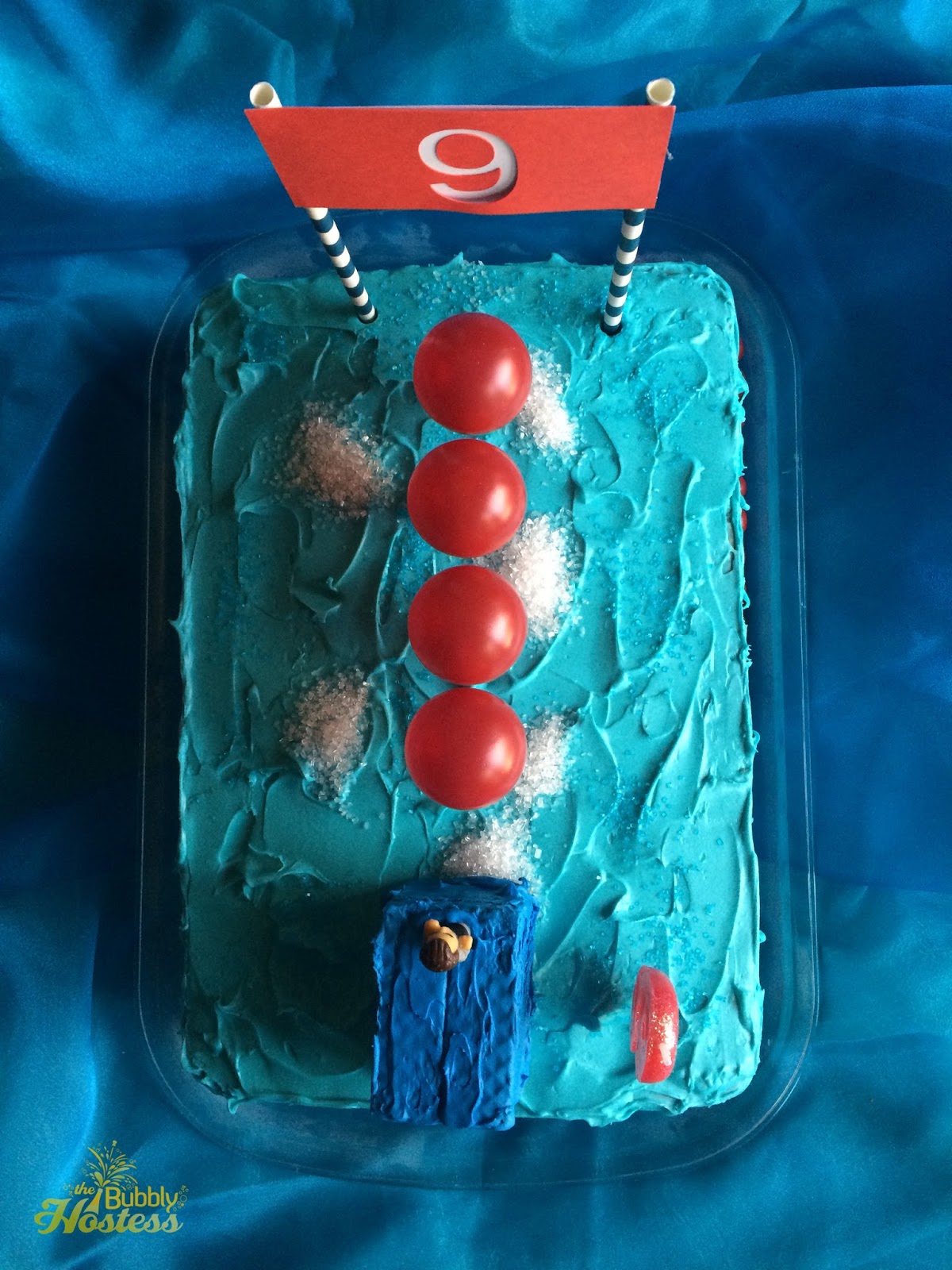 For the cake, he chose Betty Crocker’s Triple Chocolate Fudge Cake – a steer from his normal red velvet – but he is a HUGE fan of chocolate and he loved every bite.  We stuck with a Classic Vanilla Creamy Home-Style Frosting from Duncan Hines and colored it.  After looking through the choices of Wilton Icing Colors in the pantry, we started with Teal and then added just enough Royal Blue to get the Wipeout Water he wanted.  {I have two boys.  I have several shades of blue icing colors on hand at any given time.}

We used red ping pong balls that were glued to straws, vanilla creme wafers covered with leftover frosting that I tinted a darker blue made the platform, and Crafted by Kiki made the “finish line” #9 sign for  me.  All designed by my son.  He even added the piles of white sprinkles to reflect the mounds of bubbles you see in the Wipeout Water on the show!

For the invitations, we purchased these from M3AndCo on Etsy – then printed and cut them ourselves. 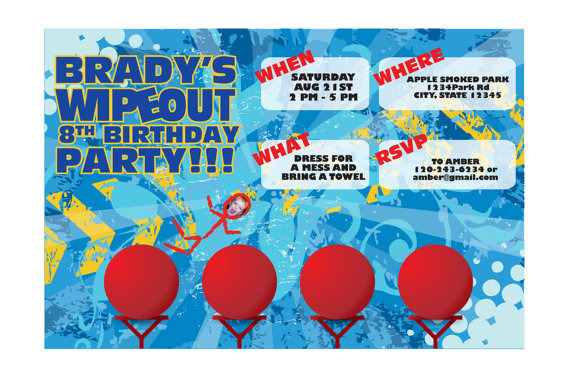 The party was at 11:00 a.m. so decided to serve snacks and lunch.  He wanted to serve Crockpot Chicken Tacos along with chips, salsa, and guacamole.  But for the fun stuff?  We decided to use Pretzel Rods to represent the Wipeout “Sweeper Bars” alongside a platter of Nutella as a “Mud Pit” for dipping.  He confirmed that there would be a spoon in the Nutella to ensure we didn’t have any “double dipping”. 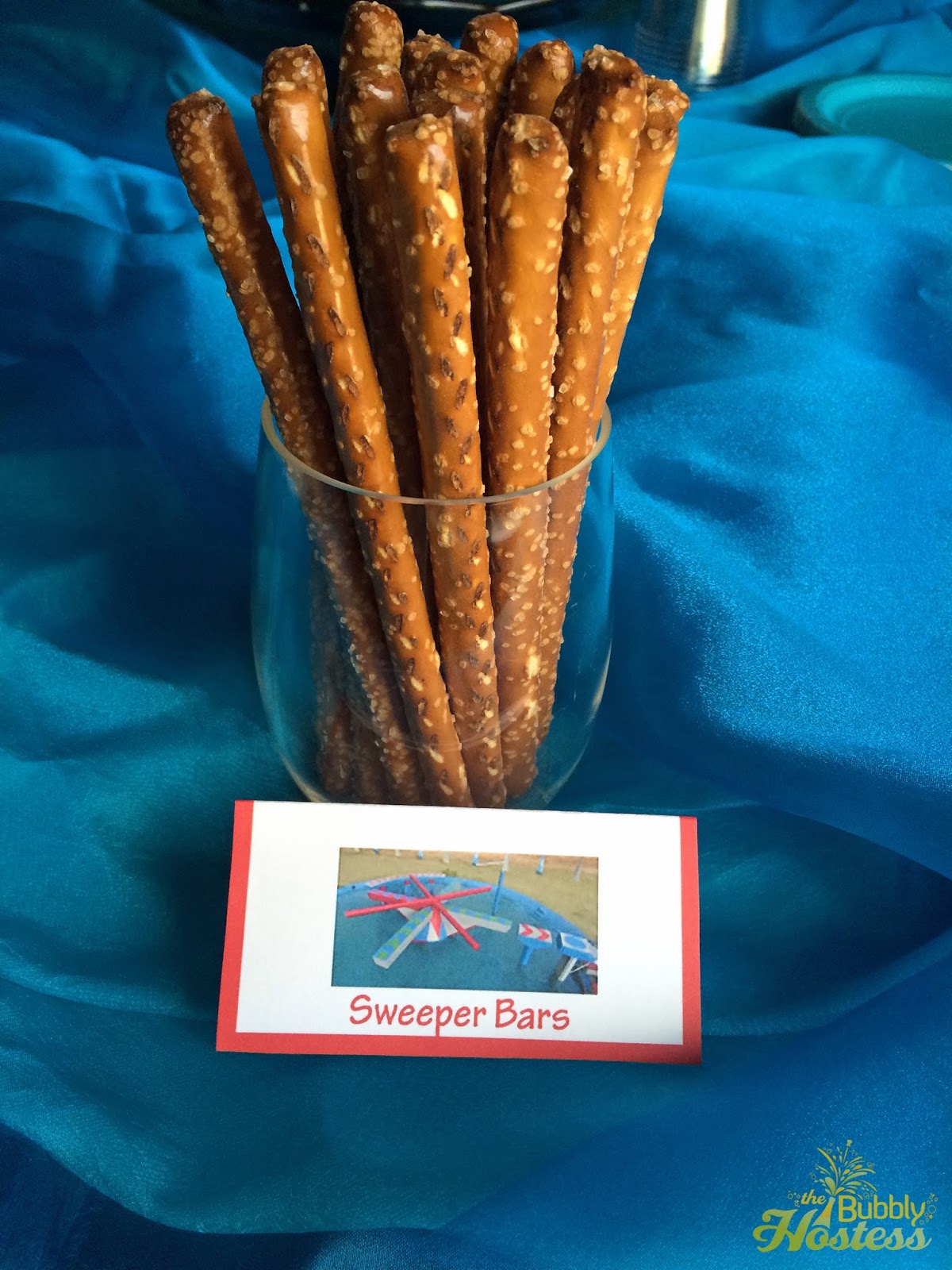 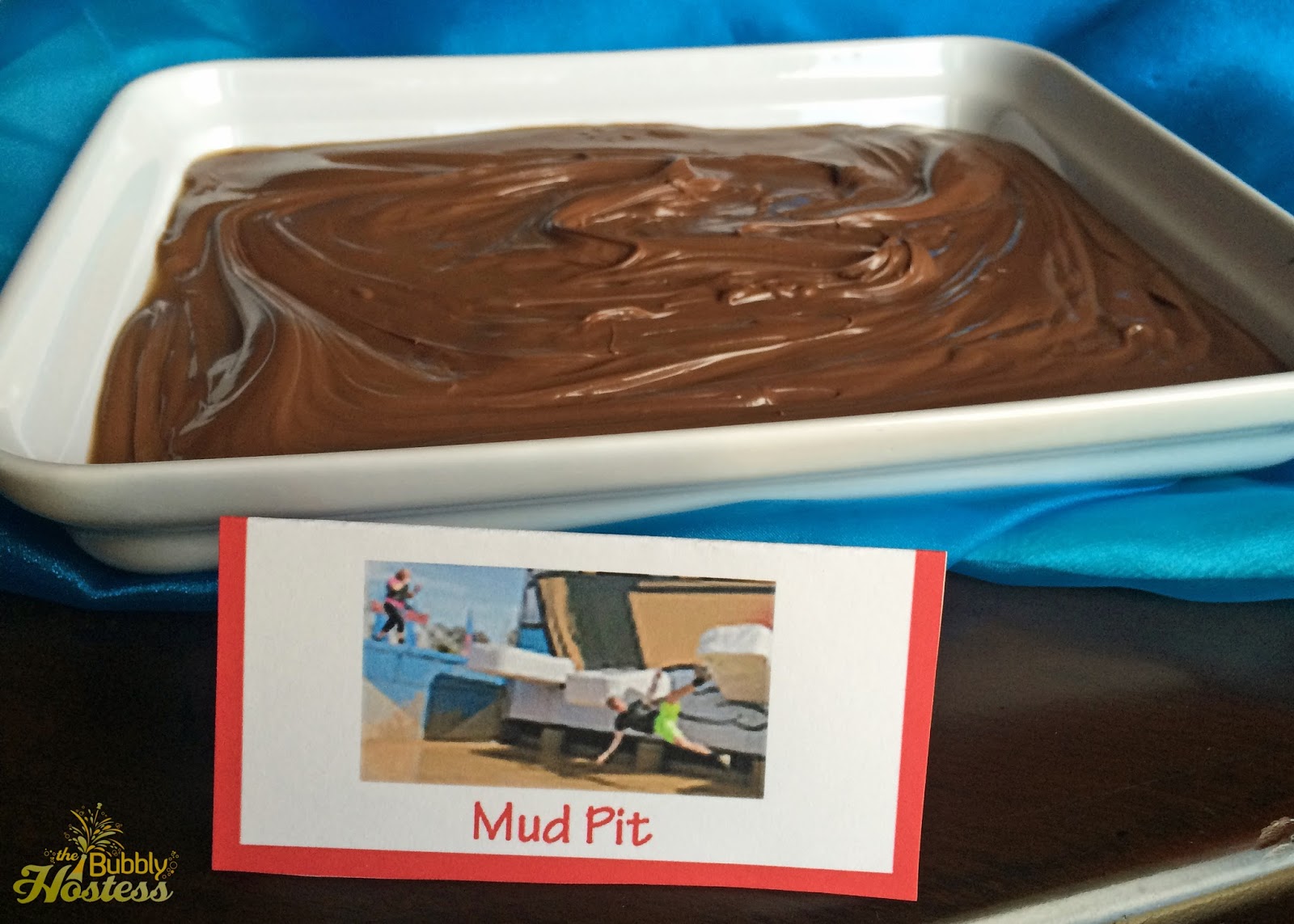 We also served “Big Red Balls” a.k.a. cherry sour balls.  You’ll also see these at the base of the cake! 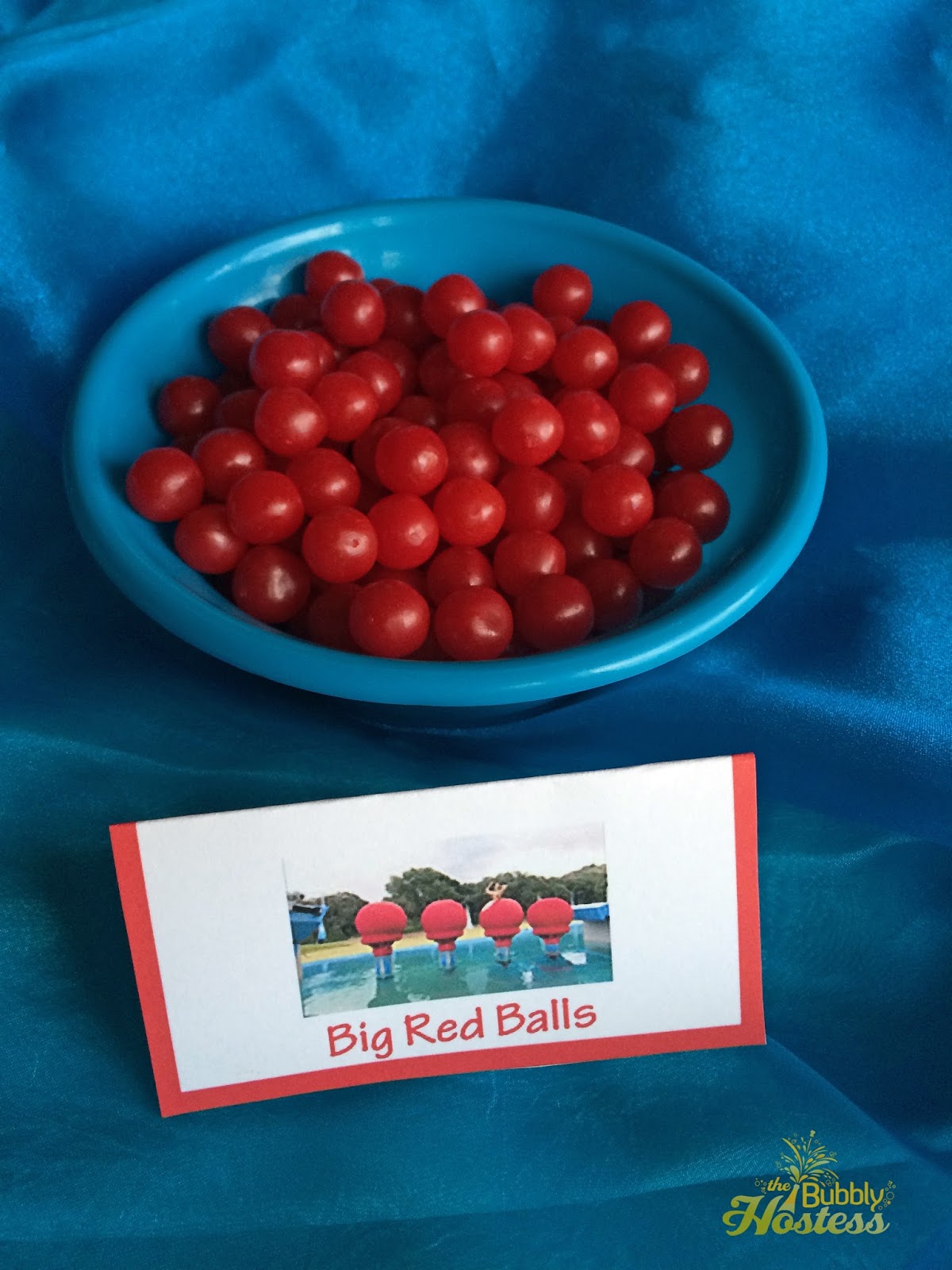 My son really thought the “Pool Water” was pretty cool at his little brother’s Birthday Pool Party earlier this summer – so we did the same only calling it “Wipeout Water” instead. 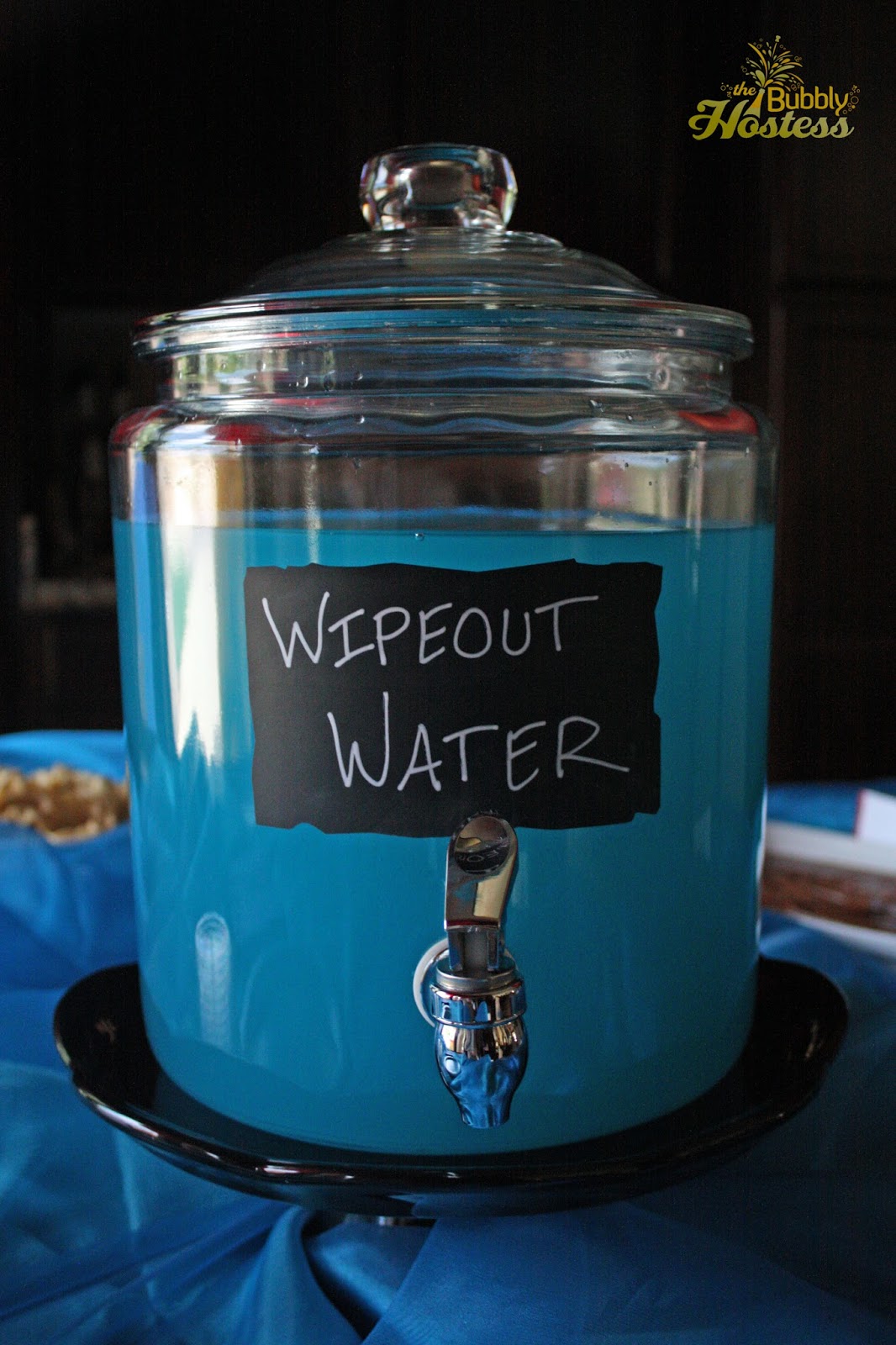 I did some local shopping and purchased four red 36″ balloons from the TomKat Studio Shop – these were awesome! When I had them inflated, I asked for the “hi float” in the balloons and am expecting these to decorate our house for awhile!  These were tied down behind the food and cake table, but because of the window being behind them, the photo doesn’t do them justice!  The kids LOVED them while the dog barked at them. 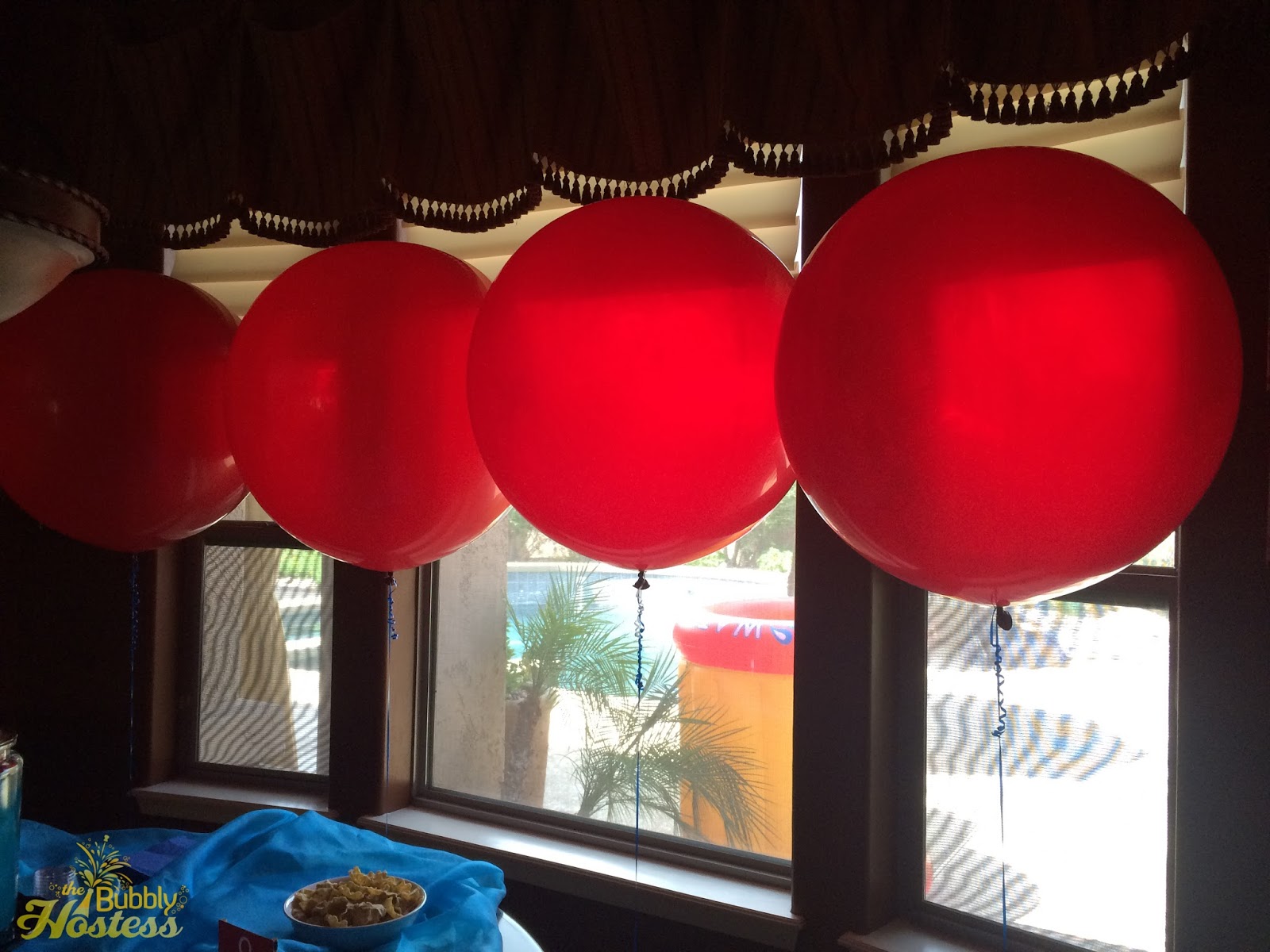 My son designed the obstacle course, drew everything out in a notebook for me, and made the list of supplies we’d need.  Some of this was very make-shift but it worked perfectly!  The contestants first had to maneuver through two adults (which later became other kids!) swinging noodles at them {not shown here}, then step through small intertubes.  Next, hurdle over 3 noodles taped down to buckets – oh, and The Hubby decided to spray them with the hose as they went through this. 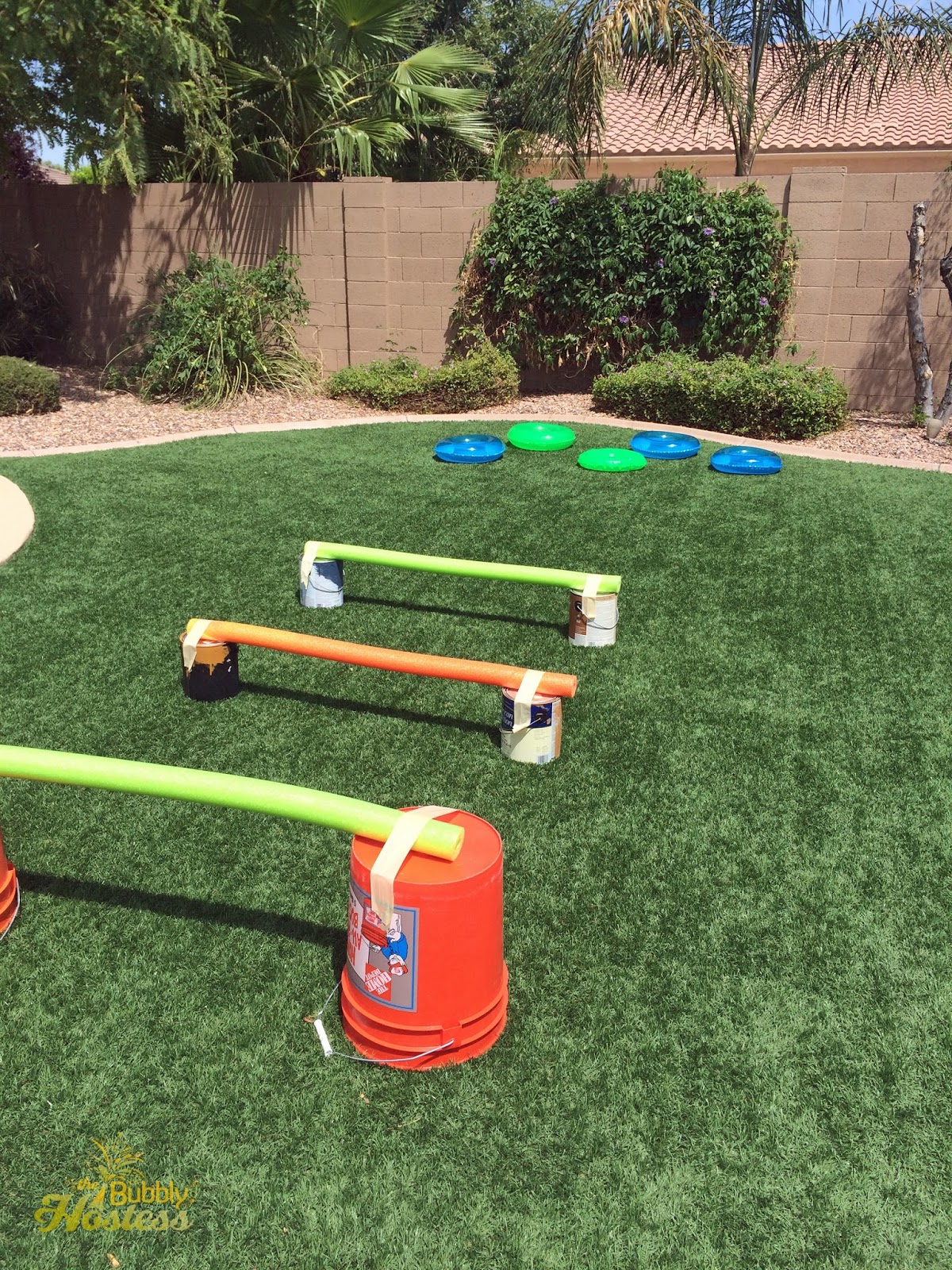 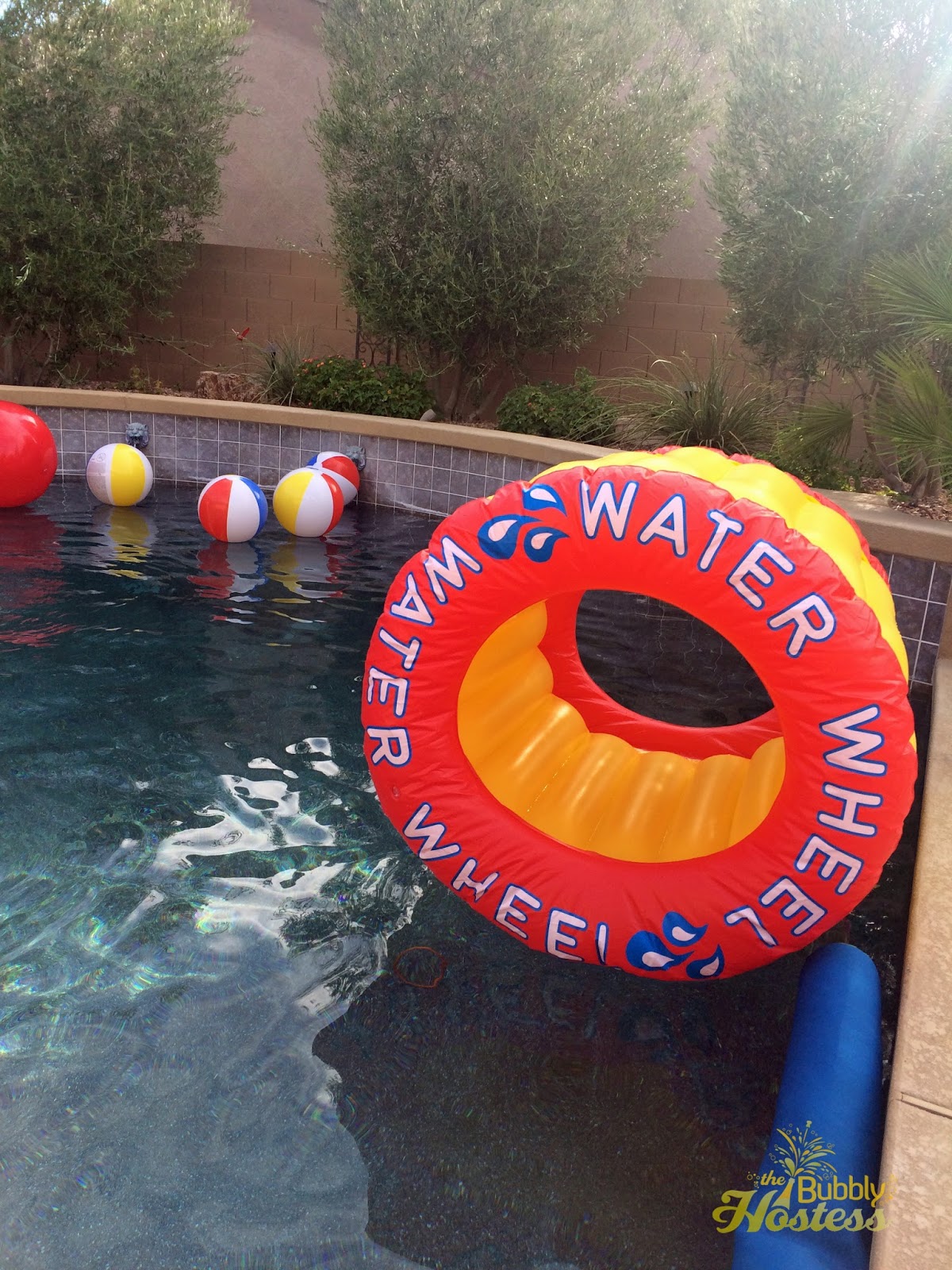 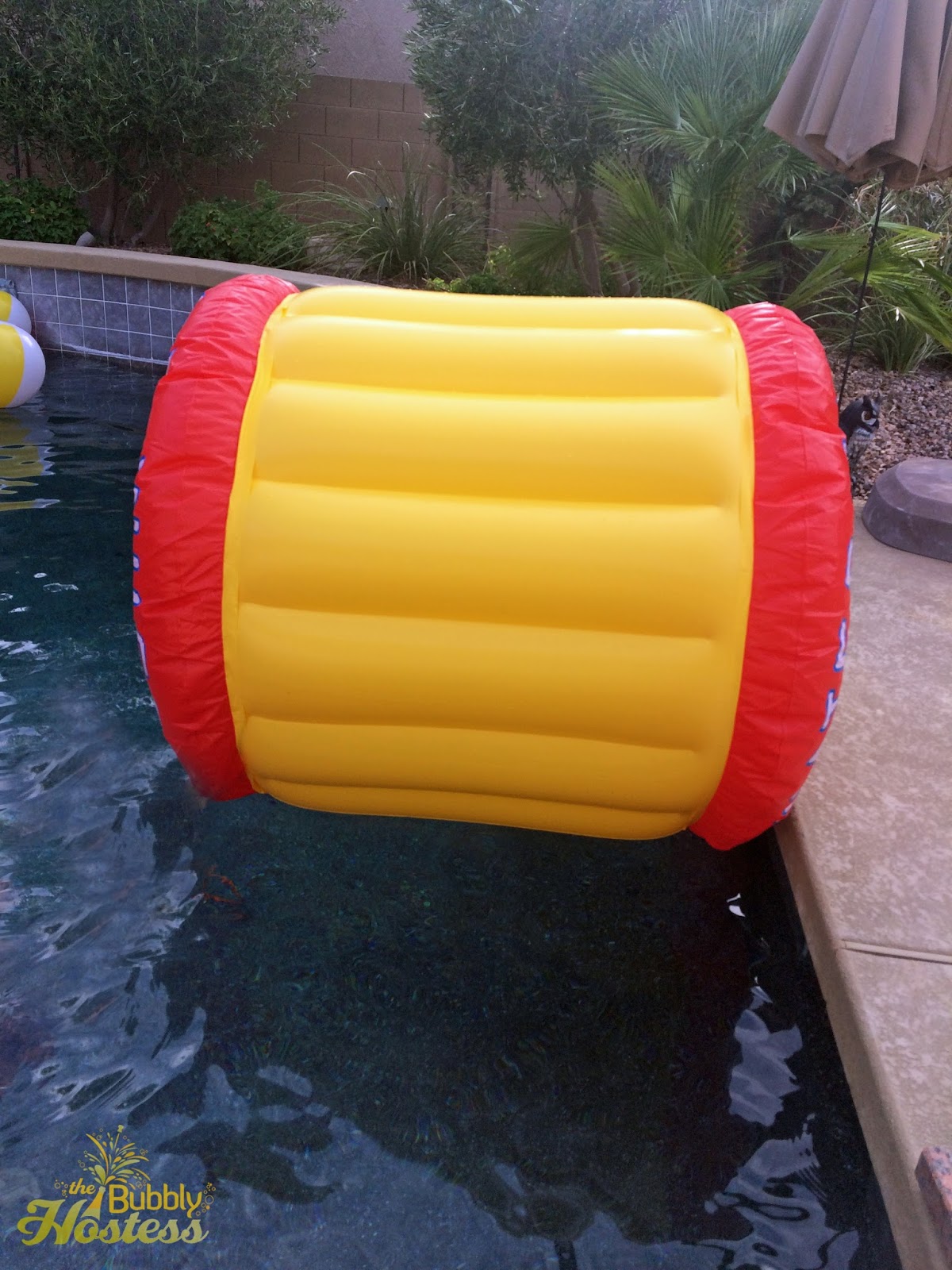 Once on the other side of the yard, they had to cross over a baby pool while being sprayed with water guns and last but not least, leapfrog over the “big red balls” – these awesome 36″ red beach balls were the perfect find for me from Beachballs.com. 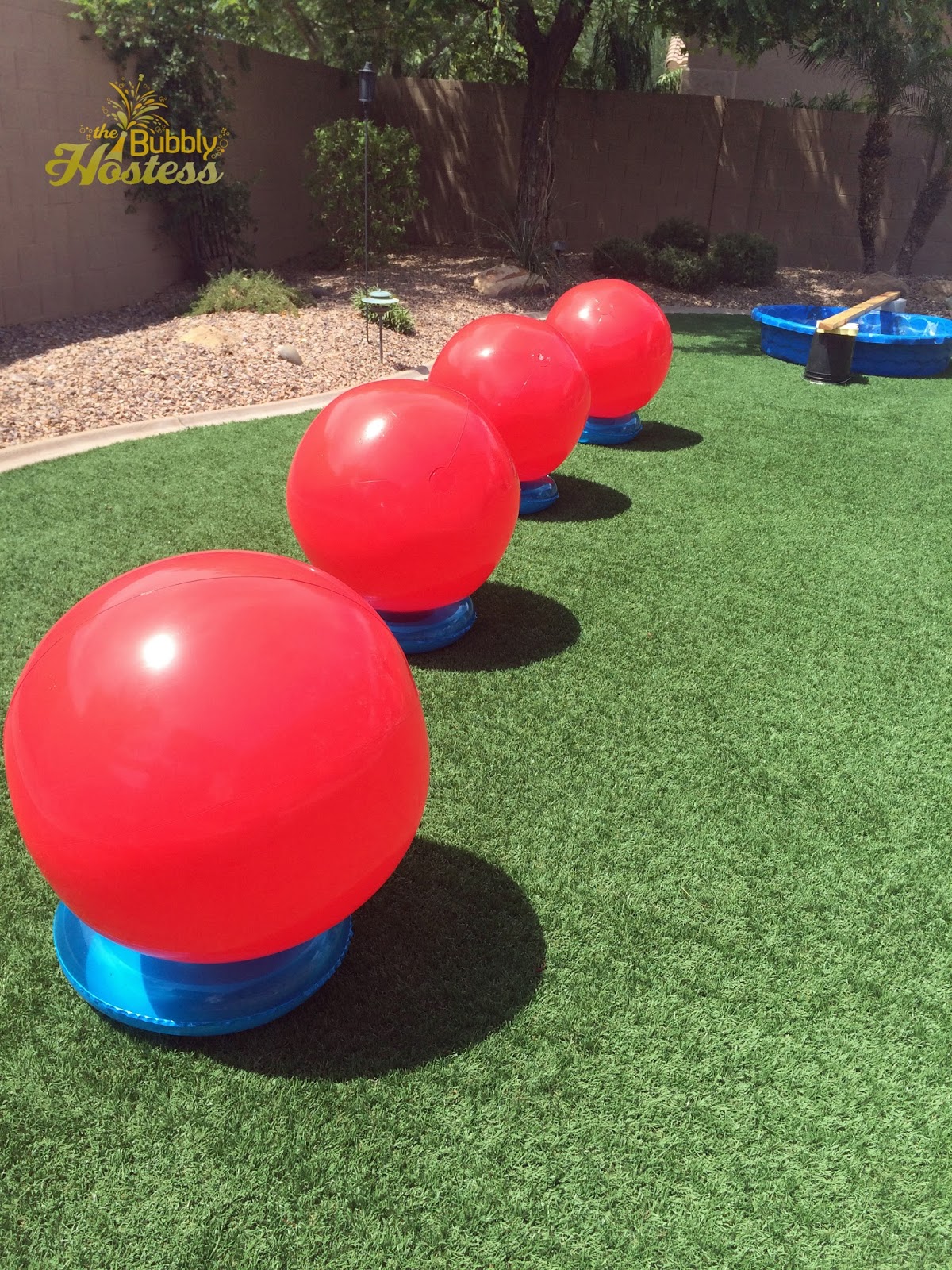 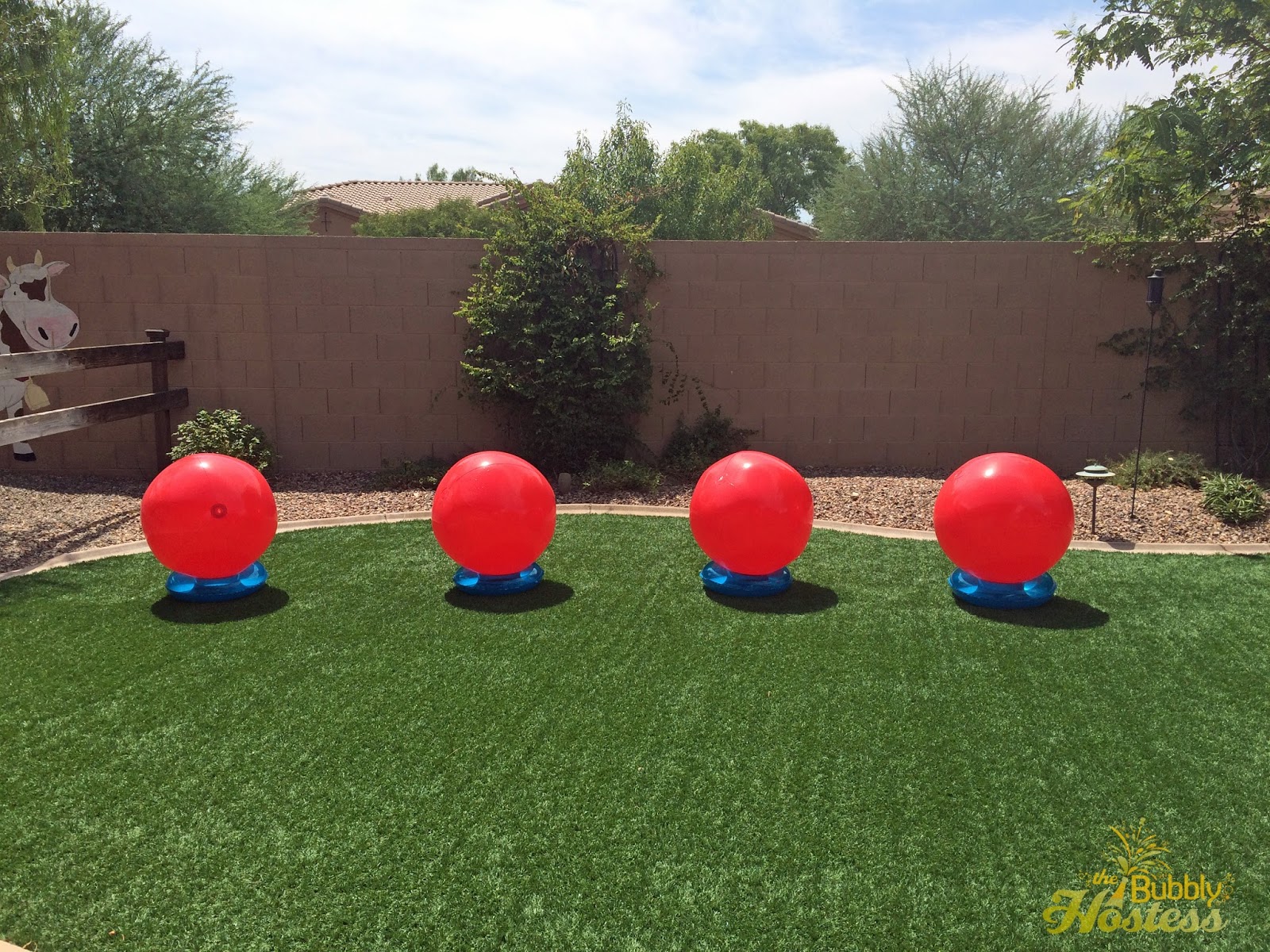 For the party favors?  That was a slam dunk – red playground balls of course! 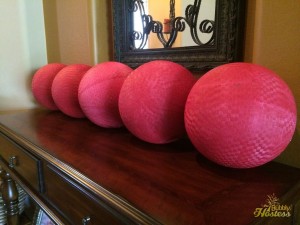 Everyone had a great time – my son chose a small trophy for the winner of the competition, and ended up taking home 1st place himself!
(Visited 11,635 times, 2 visits today)
Birthday PartyKids Birthday PartyWipeoutWipeout Birthday Party
2 Comments

A Little Shopping on Etsy for the Skylanders Birthday Party