Wow.  This cake was not my friend this past weekend!  I really wanted to try to cover a cake in fondant – so I did.  Ugh.   We had a trial run a couple of weeks ago on a small, round, cake – not so difficult.  For this cake, I used a 12″ x 17″ pan to make two layers of cake.  My son wanted a strawberry cake, so I decided to go with a store-bought cake mix.  Three boxes per layer.  Yep – it was a big cake!

Once the cake was done, I cut it to make it “head-shaped” and I did a quick crumb coat with a store bought frosting – just to seal it overnight.

I made a marshmallow buttercream fondant a couple of days before I was ready for it.  I used an entire jar of Wilton red gel food coloring and kneaded it into a batch and a half of the fondant – my gloved hands were killing me!

The night before the party, I prepared my work surface, dusted it with powdered sugar, and started to roll out that gigantic ball of red fondant.  I needed it to be about 22″ in circumference to cover the cake.  I had problems with it sticking, I kept adding more powdered sugar underneath, the hubby got involved – finally, after the third “roll out” I was ready to put it on the cake.  Then, it tore.  Like, a lot.

It was unrecoverable.  I took it off of the cake and it was covered in frosting and cake crumbs.  In a “rage” I threw it in the garbage and started cleaning up the kitchen – very loudly (did I mention I have Italian and Irish blood running through me?  It doesn’t take much to send me overboard!)

The next day, with the little one in tow, I headed to Michael’s to buy more food coloring then to Target for more marshmallows and powdered sugar.  While at Michaels, I talked to a store associate as I was eyeing Duff’s Buttercream Fondant in a tub.  She said that it tasted good and was easy to work with – I was sold.  I still bought two more jars of the little red Wilton coloring.  Then headed to Target (quick stop at the bakery for a free cookie for the little one) and bought more powdered sugar along with 4 cans of frosting in the event that I had to mix with the red food coloring and frost the cake at the last minute.  I took the hubby’s advice from earlier that morning – buy more than you think you need.  As planful as I am, it never fails that I am either at the grocery store or sending someone else to the grocery store to buy stuff I forgot when I am in the middle of party preparations!

The Duff buttercream fondant worked perfectly!  I gently placed it over the cake as best I could – and had to do some “patching”.  It wasn’t a round cake – it was head-shaped, so it wasn’t easy!  The hubby was awesome enough to create paper templates for me to use with the remainder of my homemade fondant that I saved and made half white and half black for the mask decoration.

Overall – the cake was a HUGE hit with the party going kids…..and most importantly, my oldest.   He overheard me on the phone several times saying that the cake….well, looked…not so good!  Every time he would quickly correct and tell me how awesome it was!

It was all worth it! 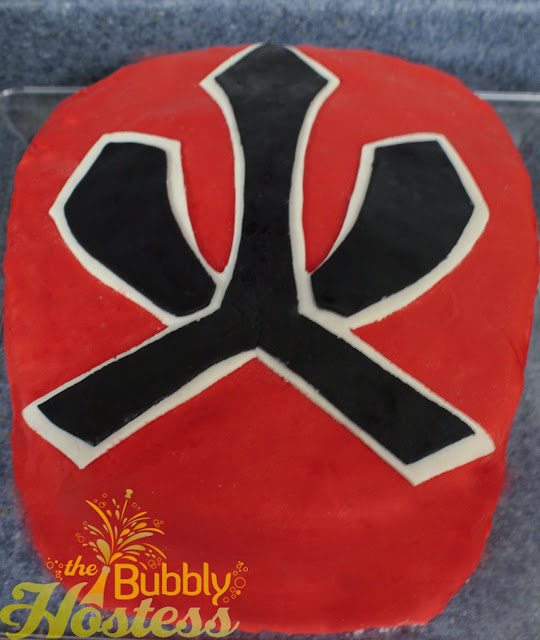