A girlfriend of mine made this buffalo chicken dip for our New Year’s Eve party – it was DELICIOUS!  We have had a similar dip that is served in a crock pot – all mixed up – but this was more of a baked option.

The original recipe called for blue cheese dressing.  I know that there are many people who would prefer ranch dressing with their buffalo chicken over blue cheese (the hubby included).  So I made 1 1/2 times the amount in the recipe my girlfriend gave me and split it into two 8×8 dishes instead of serving it in on 9×13 dish.  One had ranch, one had blue cheese.   I also used two different cheeses for the topper (mostly to be able to more easily identify one from the other).   For the ranch dip I used a four cheese Mexican blend and for the blue cheese dip, I used a mild cheddar.

The version I made in the 8×8 pan ended up being a little thicker than the 9×13 but it still worked.  I made this for our monthly Couples Euchre night and added a spoon to each dish so everyone could serve some on their plate and dip their Tostitos Multigrain Scoops and cut celery into it.  It was very hearty – I ended up using a fork at times to get it into my chip!

Overall, the ranch version was more popular.  I enjoyed both – but we definitely had more of the ranch dish consumed!

Next time I may try to use blue cheese crumbles instead of the dressing – I’ll let you know how it turns out!

I hope you try both – you can always cut down the recipe to make one 9×13 dish as well.    I cooked my chicken in the crock pot all day with some chicken broth and beer then shredded it.  Canned chicken can be used as well, but you will have a different texture.

To make the chicken in the crock pot, the morning you are making the dip, add frozen chicken breasts to crock pot, bottle of beer, and some chicken broth to almost cover.  Cook on high for several hours.  Continue turning them throughout the day to cook them and start to break them apart.  Add salt and pepper as well as garlic powder.  Once cooked, finely shred the chicken, remove from liquid, add a little bit more salt and pepper.  Set aside.

Once you are ready to make dip and the cheese is at room temperature, preheat oven to 375 degrees. Add the shredded chicken and Frank’s Red Hot Buffalo Sauce to a large saute pan.  Stir to coat.

Between your two 8×8 pans, spread your softened Neufchâtel cheese (12 oz in each pan).   Next, split your shredded chicken between the two pans like this: 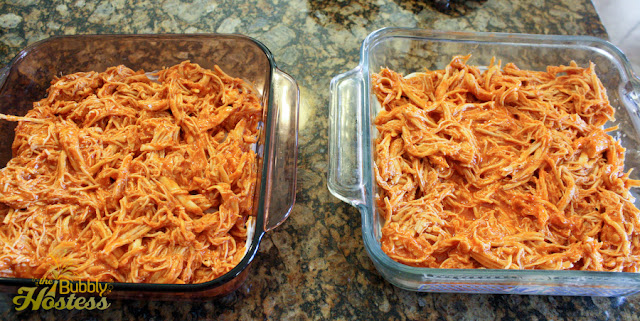 Add shredded cheese to each pan, enough to cover dressing. 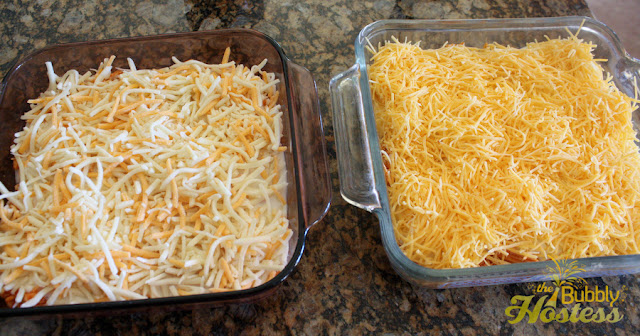 Bake for 20 minutes, or until cheese is melted.  Up your oven temperature to a broil, move up the rack, and cook until the cheese is nice and broiled.  Serve warm with chips and celery.